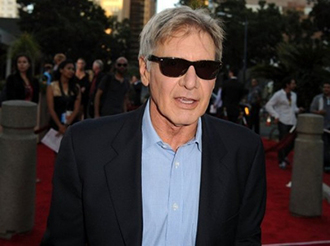 LOS ANGELES - Veteran actor Harrison Ford could reprise his role as Han Solo in “Star Wars” in a new movie set for release in 2015 after Disney bought the studio behind the sci-fi saga, a report said.

The 70-year-old has previously appeared cool on the character he played in the first three “Star Wars” movies. But he has not ruled out returning for what will be the seventh movie in the series, according to Entertainment Weekly.

“Harrison is open to the idea of doing the movie and he’s upbeat about it, all three of them are,” a “highly placed” source told the magazine, referring to Ford and fellow actors Mark Hamill and Carrie Fisher.

Ford found fame in the first “Star Wars” movie in 1977, and played his part again in the second and third installments, which made up the initial trilogy.

He did not appear in the second trilogy, made between 1999-2005, and has been generally dismissive of his character, telling an ABC interviewer in 2010: “As a character, he was not so interesting to me.”

“I don’t know that I understood it very well,” he said of the “Star Wars” phenomenon, adding: “I’m not sure I understand it yet. I was very happy to be involved. I was pleased to be a part of an ensemble.”

Entertainment Weekly said in its Monday report that Ford, who went on to big screen success, including megastardom in the blockbuster “Indiana Jones” movies, will not commit to the new “Star Wars” film until a director and script are confirmed.

Either could be a deal breaker, the magazine reported. A spokeswoman for the star declined to comment on the report.

“Star Wars 7” will be released in 2015, “with more feature films expected to continue the Star Wars saga and grow the franchise well into the future,” said Disney in announcing the deal to buy Lucasfilm.