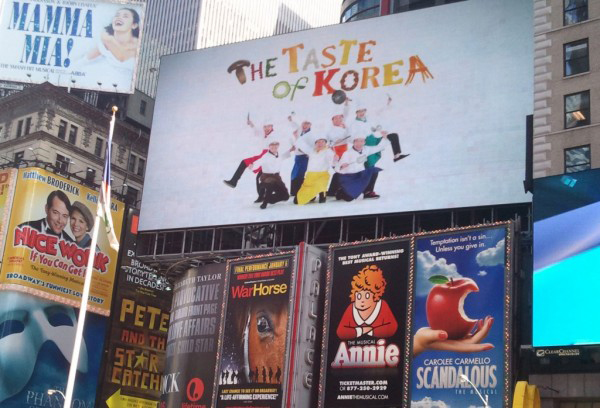 Prof. Seo Kyung-duk has done it again. In a bid to promote Korean culture in the United States, Seo and the cast of the hit variety show “Infinite Challenge” have joined forces to produce a 60-second video on the traditional dish bibimbap.

The video will play on the TSQ at Times Square in New York two times per hour, amounting to 1,500 times in a month.

The film clip is an extended version of the 30-second video produced by Seo, a visiting professor at Sungshin Women’s University, about two years ago.

“I’ve been promoting bibimbap in New York for the last few years, and this year was no exception,” said Seo.

“This year’s video will be posted on YouTube, Facebook and Twitter so that people from all around the world will be able to view it,” said Seo on his ambition to spread Korean culture.

Previously, Seo has collaborated with singer Kim Jang-hoon and actress Song Hye-gyo to raise awareness on different issues to do with his homeland.