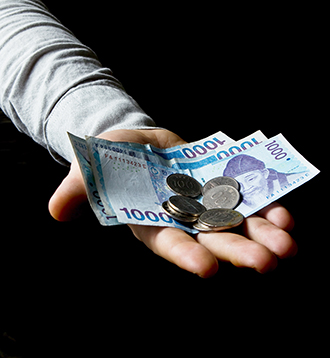 The tax agent told Kim he owed the government 2.5 million won ($2,300) in insurance payments. At the time, Kim was being treated for a failed kidney, which should have been covered by his national insurance. However, Kim’s policy was made out under his daughter’s name, as he had retired and was not receiving any income. The problem was that his daughter at one point was in-between jobs, and therefore all of the national insurance payments were not made.

Kim could have avoided all of this and get medical service for free or at a discount at a government-designated hospital as he was the son of a soldier who received a national award for his service during the 1950-53 Korean War.

“If I owe the government taxes I will pay it, but it makes we wonder why they would call me nine years after the fact and not when I was being treated at the hospital,” Kim said. “If I were told then, I would have gone to the other hospital instead of ending up with unpaid taxes.”

In another case, a 34-year-old housewife received a similar call asking her about an apartment she sold two years ago. The tax agent told her she owed the government on the profit she made from selling her apartment, which the housewife thought she was exempt from. The tax agent said the housewife would have received a lower bill if she had reported the amount of sales and acquisition tax voluntarily instead of waiting for the tax office to contact her.

The lady and her husband were told would have been exempt from paying their capital gains tax if they had sold one of their apartments within five years of tying the knot.

The husband and wife each had an apartment under their own names when they wed, but the wife sold off hers two years ago. However, the husband was paying tax on a plot of land in a rural area on behalf of his father, and the tax office mistakenly believed he actually owned three apartments at the same time. The couple was finally let off the hook and did not have to pay burdensome capital gains taxes after the district tax office cleared up the matter and confirmed the plot of land did not in fact belong to the husband.

“When I first got the call, it felt as if the tax office was dropping a huge bomb on us,” said the housewife. “Luckily, the misunderstanding has been cleared up, but if we were slapped with the capital gains tax it would have put us under enormous pressure financially.”

The National Tax Service is suspected of stepping up its probe on unpaid taxes dating back as far as a decade, not only on tax evaders with high incomes but also on the general population.

The recent crackdown comes as the tax agency is falling short of its targets in terms of collecting tax revenues.

Lee Hyun-dong, head of the tax agency, told lawmakers last month during a National Assembly audit that as of August it has collected 135.5 trillion won on taxes this year, or 70 percent of its target of 192.6 trillion won for the year as a whole.

A recent report by the Ministry of Strategy and Finance said it is unlikely it will meet the target. This is particularly so as the government in September announced several forms of tax relief to boost the sagging economy, including tax cuts for those who purchase apartments.

“The biggest reason tax collection has fallen far short of our target is because of the sluggish domestic market caused by contracted spending,” Lee said. “The government measures to stimulate the economy are likely to further affect tax revenue.”

The situation is expected to get worse next year as Korea’s economy is likely to post tepid growth. The Bank of Korea recently lowered its outlook for 2012 from 3 percent to 2.4 percent, which would be the worst rate since 2009 in the wake of the financial meltdown. Its outlook for next year was revised down from 3.8 percent to 3.2 percent.

But some expects have recently questioned whether either of these targets is achievable as the global economy looks to be freezing up at an alarming rate.

With people shutting their wallets and companies’ revenue shrinking, the government and tax agency are desperately scratching around for solutions.

The campaigns of the three leading candidates for the Dec. 19 presidential election are focusing on welfare, which is putting more strain on the tax agency as it needs to collect more cash to satisfy the budget.

Lee at the National Assembly audit told lawmakers that the tax agency will work to better manage the way it collects tax revenues and crack down on high-earning tax evaders.

As of June, outstanding taxes amounted to nearly 6 trillion won, up 9 percent from the end of last year. The majority of the unpaid taxes, or 3.9 trillion won, were owed by individuals. Some 6 percent, or 356 million won, was three years overdue.

The agency has fixed wealthy tax evaders in its crosshairs this year. In February, it launched a special department comprising 17 teams and nearly 200 employees to track down violators. This led to confiscations of expensive art collections, among other seizures.

Some 1.1 trillion won of the unpaid taxes was found to be made up exclusively of people who each owed the government more than 1 billion won.

The tax agency said its investigation was no different from those conducted in the past.

“We routinely get assigned questionable tax reports, and these can date back as far as 15 years,” said one agent from a local tax office. “In can take us years and years to get round to them because of our huge workload.”