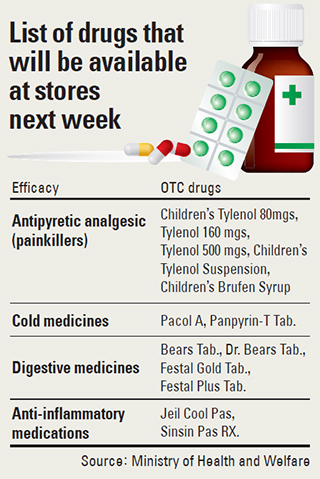 Several over-the-counter (OTC) drugs will be sold at retailers and convenience stores from next week in line with the revised Pharmaceutical Affairs Law.

The retail industry said yesterday the top convenience stores are making efforts to secure stable supply chains for OTC drugs so they can sell 13 of them without a hitch from next Thursday.

The list was revealed by the Ministry of Health and Welfare in July after the National Assembly green-lit the revised law in May. Another seven drugs on the bill may be introduced to stores later.

BGF Retail, which operates CU, the nation’s largest convenience store franchise, said it has selected Dongwon Pharmaceutical as its distributor to manage storage and shipping.

Other chains like GS25 and 7-Eleven said they would also use wholesalers, while Ministop will not. “Ministop will make a good impression on its customers by providing a steady supply of the drugs,” said Hong Sung-jin, manager of its food product division.

The retailers are also pushing to educate store owners on how to properly deal with OTC drugs.

In order to prevent abuse of the drugs, they will be sold in small, often one-day doses and sales will be highly restricted. Customers under the age of 12 are prohibited from buying them.