Fourth-generation iPad a refresh, not a revamp

Fourth-generation iPad a refresh, not a revamp 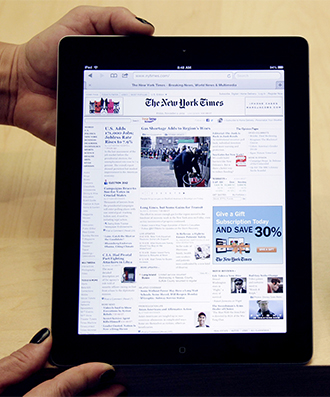 Normally, the release of a new version of Apple’s tablet is the occasion for mass salivation on the part of the faithful. But it’s safe to say there won’t be lines of fans outside the store for the fourth-generation iPad.

Not that there’s anything wrong with it. In fact, it’s got a couple of nice new features on top of the ultra-sharp 9.7-inch Retina display and other enhancements that were unveiled in the third-generation iPad only seven months ago.

But this one is much more a refresh than a revamp. It completely replaces the previous model in the Apple lineup: Same price (starting at $499 for a 16-gigabyte Wi-Fi-only model), same options (ranging up to $829 for one with 64 gigabytes and capable of running on the AT&T, Sprint or Verizon cellular networks), and same choice of color (black or white).

From the user’s standpoint, the biggest difference is probably the replacement of the traditional 30-pin connector with Apple’s new Lightning port, the same one found on the iPhone 5, latest-generation iPods and the new, much-more-anticipated iPad mini that’s also reaching the shelves today.

I like the new connector. It’s much smaller and the cable is reversible, meaning there’s no wrong way to plug it in. At the same time, as with the iPhone 5, it renders existing peripherals obsolete unless you buy Apple’s adapters, which aren’t cheap. It’s $29 for the adapter alone, $39 for the version with a cable.

The other changes in the new model are real, but not nearly enough to lead anyone with a third-generation iPad to rue their purchase, let alone induce them to upgrade.

The most visible difference I encountered comes in the front-facing camera, which has gone from 0.3 megapixel to 1.2 megapixels. From a practical standpoint, that meant a visibly sharper image for people on the other end of my FaceTime video calls.

The new version also has a faster microprocessor - Apple’s new A6X chip - with enhanced graphics and improved Wi-Fi antennas. In side-by-side tests, I found the new one ever-so-slightly faster at doing things like launching apps. But most people, I think, would never notice in everyday use, at least until new apps come out to take advantage of the greater power.

And by then, of course, we may well be on to the fifth-generation iPad.