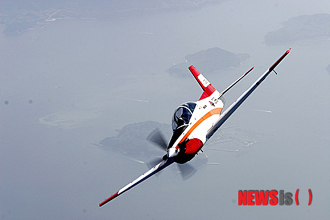 Korea will export its homemade KT-1 trainer jets to Peru, an official from Korea Aerospace Industries (KAI) said yesterday. “We signed a deal to export 20 KT-1 trainer aircraft, developed by KAI, to Peru as the country is planning on replacing trainer jets for its air force,” the official said.

The deal is worth about $200 million. The single-engine, two-seat KT-1 was the first trainer aircraft to be built using indigenous Korean technology in 1998.

They are used for training fighter pilots. The maximum speed of the KT-1 is 574 kilometers per hour (355.67 miles per hour) and the maximum flight altitude is 11.58 kilometers (7.2 miles). Of the 20 jets exported to Peru, four will be completely manufactured in Korea and the remaining 16 will be assembled in Peru by KAI and the state-run Seman Peru, a company under the defense ministry.

It is the third time that Korea has sold KT-1s overseas following its first deal with Indonesia in 2001 and with Turkey in 2007. In June, President Lee Myung-bak met with Peruvian President Ollanta Humala while attending the United Nations Conference on Sustainable Development and expressed optimism over Korea being chosen for the trainer jet deal over Brazil.

When President Humala visited Seoul in May, he also spoke positively about the project, saying that there was “significant progress” in the negotiations.

He said that Peru is interested in boosting cooperation with Korea in the field of defense and weapons development. “The Latin American trainer jet market is dominated by Brazil and Switzerland,” said Park Noh-sun, a vice president of KAI. “In particular, it’s significant that Korea won the deal after competing against Brazil’s Embraer S.A., which controls 40 percent of Latin America’s mid-size passenger plane market.” “At first, we were behind Brazil in the race,” said Oh Young-ho, president of the Korea Trade-Investment Promotion Agency, “But our efforts were effective after holding five rounds of summit talks between the leaders of two countries. “[We were also able to win the deal in part] because we offered to jointly manufacture the jets in Peru,” Oh said.