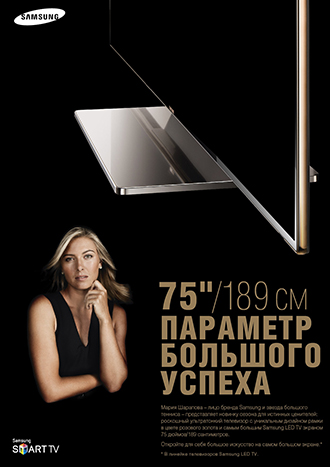 After one premium television made by Samsung Electronics, which retails for 19.8 million won ($18,200), was sold to a customer in a luxurious villa in Urumqi, the capital of China’s Xinjiang Uyghur Autonomous Region, the company saw over 10 more orders come from the area in rapid succession.

“Residents there who had seen the TV said they wanted to buy the same one,” said an employee at Samsung Electronics’ China unit.

The 75-inch LED Smart TV - model name ES9000 - is one of the most expensive mass-produced TVs in the world. It was released in August.

“In Beijing, as well, one customer who bought this TV held a house party and then two others ordered the same one afterward,” the employee said.

Samsung is expanding its presence in the premium TV market. Industry experts forecast that the world market for TVs with screens larger than 60 inches will reach 4.6 million units next year, up from four million this year.

Samsung has sold 10,000 of its ES9000 within three months of its release. It hopes to double this number in the next two months.

Samsung’s marketing strategy for its top-tier TVs differs by country. In Russia, it recruited global tennis star Maria Sharapova to advertise its 75-inch TV - the two being almost the same height.

In the United States, it offered personalized presentation for VIP customers at an event hosted by Worth, a bimonthly magazine that offers financial and investment strategies tor high-net-worth individuals.

“We tell our VIPs that we offer superb craftsmanship, and our strategy is to make them feel that our products are dignified,” another Samsung employee said.

The company also provides its premium televisions for private banking seminars in Korea, where they are used to show slides of investment options for wealthy consumers.