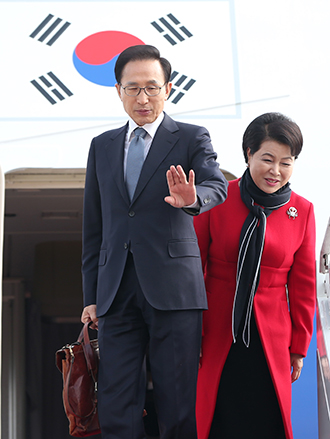 President Lee Myung-bak and his wife Kim Yoon-ok board an airplane yesterday at Seoul Airport in Seongnam, Gyeonggi, to fly to Bali, Indonesia. [YONHAP]

President Lee Myung-bak left for Indonesia yesterday for a regional democracy forum and summit talks with President Susilo Bambang Yudhoyono about ways to further expand economic and other relations between the two countries.

Lee will co-chair the Bali Democracy Forum set for today and tomorrow on the Indonesian resort island, together with host Yudhoyono and Australian Prime Minister Julia Gillard. The forum is expected to draw representatives from about 70 countries, including about 11 heads of state.

Indonesia founded the high-level annual forum in 2008 to promote democracy in the region through sharing exemplary practices and experiences among Asia-Pacific nations.

A keynote speech Lee plans to deliver at today’s opening ceremony is expected to stress the importance of democracy as a universal value of mankind and underscore the need to promote democracy for the sake of international peace, safety and prosperity, officials said.

On the sidelines, Lee will hold a summit with Yudhoyono - one of the foreign leaders with whom Lee has developed a close friendship - about wide-ranging issues aimed at deepening the strategic partnership between the sides that are marking 40 years of relations next year, officials said.

Right after the summit, Yudhoyono plans to decorate Lee with Indonesia’s highest state medal, “Bintang Republik Indonesia Adipurna,” which means “Star of the Republic of Indonesia,” in recognition of his contribution to relations between the two countries.

Saturday’s summit is expected to center on ways to expand trade, investment and other substantial cooperation. The sides also plan to sign a memorandum of understanding calling for upgrading their ties to a “strategic partnership,” officials said.

Lee plans to lay a wreath at the Korean War memorial in Bangkok as the first Korean president to do so. He also plans to meet with Thai veterans of the Korean War.

On Saturday, Lee plans to tour the Chao Praya river and the Lad Pho canal in a move seen as underlining Korea’s willingness to share its water management experience and know-how.

Thailand is working on a massive $11.3 billion project to build a large-scale water management system. The bidding process is under way for the project.

A total of 34 bidders have applied for the project, and eight of them, including two involving Korean firms, have passed a preliminary qualification test. The successful bidder is expected to be decided around April.