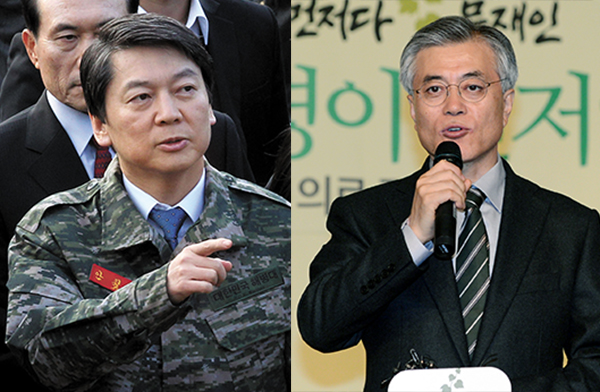 
Presidential candidates Moon Jae-in and Ahn Cheol-soo yesterday selected negotiators to begin talks on merging their campaigns and come up with a road map to political reform.

Moon, the candidate of the opposition Democratic United Party, and independent Ahn had their first meeting Tuesday and set a Nov. 25-26 deadline to decide who should stay in the race and who should stand down. The two candidates also agreed to begin working-level talks on an alliance of their supporters and a joint declaration on political reform measures.

The joint declaration on new politics is expected to explain their merger and possibly serve as a blueprint for a new style of governance if their alliance wins the presidency.

Each candidate yesterday picked three strategists to represent him.

Moon said yesterday the process could require a sacrifice from the DUP.

“The joint declaration will inevitably include measures through which the DUP, an established political party, will have to give up privileges and change its structure and party culture,” Moon said. “In some cases, it could mean a painful demand for us to sacrifice.”

Observers inside the DUP said Moon was hinting at his decision to overhaul the party leadership. Demands are growing that Chairman Lee Hae-chan and floor leader Park Jie-won give up their leadership posts to complete the political reform of the DUP, but Moon has been reluctant to go that far.

Moon also said the process of deciding which candidate should pull out won’t be easy. His campaign chief presented some preconditions to Ahn.

“The process should guarantee people’s participation, satisfy the people’s right to know and unite the people, not only the two candidates’ supporters,” said Kim Boo-kyum, head of the DUP’s central election committee.

Kim’s proposal, particularly the requirement to guarantee public participation, appeared to be a demand for a primary.

Analysts believe Moon would benefit from holding a primary based on the DUP’s power to mobilize voters, and Ahn would see an advantage in choosing the candidate through an opinion poll.

Talk of the public’s “right to know” suggests a demand for public debates between the two men.

Time is running out, so a primary is seen as increasingly unlikely. But the DUP doesn’t want to rely entirely on an opinion poll.

“If we only use opinion polls, it won’t be enough for the DUP,” said Representative Shin Geh-ryoon of the Moon campaign.

A possible alternative is a televised debate and an evaluation of who won it. That idea was used to decide between the DUP’s Park Young-sun and independent Park Won-soon during last year’s Seoul mayoral by-election.

A jury of scholars and civic group representatives could rate the performances of the candidates after a debate. Choosing the jury is expected to be a challenge.

Another challenge will be preventing the two candidates’ supporters from drifting away after the merger.

According to a JTBC-Realmeter poll Tuesday, Park Geun-hye was the winner of a theoretical three-way race with 42.1 percent of the votes, followed by Ahn with 27.4 percent and Moon with 24.1 percent. Simply adding the support rates for Moon and Ahn would give a consolidated liberal candidate 51.5 percent support. But another poll showed that some supporters will slip away in a two-way race.

A DUP source said the men have to create a framework that includes what comes after the presidential victory, such as a coalition government proposal.