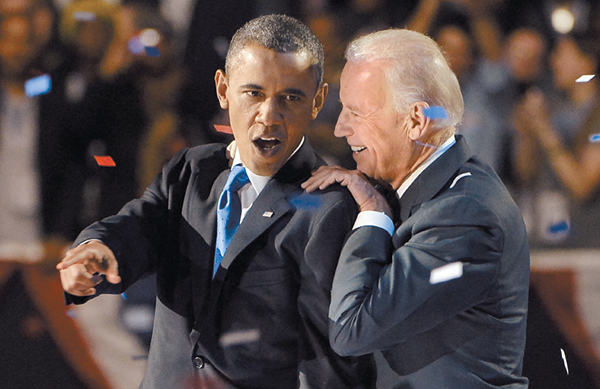 
U.S. President Barack Obama secured a second term in office on Tuesday with a victory over his Republican rival Mitt Romney after a first term that brought Korea-U.S. relations to the strongest point in decades.

“In this election, you, the American people, reminded us that while our road has been hard, while our journey has been long, we have picked ourselves up,” Obama said in a victory speech in his political hometown of Chicago. “We have fought our way back. We know in our hearts that for the United States of America the best is yet to come.”

After a tight race that hinged on voters’ perceptions of which candidate could best repair the fragile U.S. economy, Obama said, “With your stories and your struggles, I return to the White House more determined and more inspired than ever about the work there is to do and the future that lies ahead.”

Romney made a concession speech in Boston wishing Obama the best.

“This is a time of great challenges for America, and I pray that the president will be successful in guiding our nation,” he said.

As of 1 a.m. Wednesday, Obama, who was elected the first African-American president in U.S. history in 2008, won 303 electoral votes, including Ohio, Wisconsin and Colorado, while Romney won 206 out of a total of 538.

President Lee Myung-bak congratulated Obama, saying he hopes the two countries will further develop their strong alliance in the future.

“I’m very pleased to hear the American people chose President Obama,” Lee said in a written message sent to Obama yesterday. “I’m sure that the Korea-U.S. alliance will continue to develop in the future.”

The Blue House also issued a separate statement in the name of presidential spokesman Park Jeong-ha, saying “We expect the two sides will closely cooperate with each other to develop the comprehensive strategic alliance in the next four years.

“We want to continue to work closely for peace and stability on the Korean Peninsula and Northeast Asia in the years to come,” the statement read.

Under Lee and Obama, Seoul and Washington have seen ties get closer, and the two presidents have also become unlikely friends. Obama even declared the bilateral alliance “the linchpin” for security in the Pacific region in 2010.

Last March, a free trade agreement between the two countries went into effect after years of negotiations.

The two countries have cooperated closely on North Korea. Obama has maintained the so-called “strategic patience” policy on North Korea, waiting for Pyongyang to return to the negotiating table to end its nuclear weapons program while keeping pressure on the communist regime through sanctions.

Analysts in Seoul projected yesterday that there will be no drastic change in Washington’s North Korea policy or South Korea-U.S. relations as a result of the U.S. election.

But bilateral cooperation on North Korean affairs could be tested by the change in administration in Seoul after the presidential election next month.

All three major presidential candidates - the Saenuri Party’s Park Geun-hye, the Democratic United Party’s Moon Jae-in and independent Ahn Cheol-soo - have said South Korea’s policies on North Korea should be less strained than those of the Lee Myung-bak administration.

“The Korean presidential election will have more impact on bilateral relations [with the U.S.] because the candidates have slightly different perspectives on diplomacy,” said Leif Eric Easley, a professor of international studies at Ewha Womans University.

“Future relations between Korea and the U.S. depend on who takes office in Korea rather than the foreign policy direction of Obama’s second administration,” said Chun Chae-sung, professor of international relations at Seoul National University. “If an opposition candidate takes office and enhances a policy of engagement with North Korea, it will have different priorities from the U.S. policy on the North.”