Jeonse tenants at risk due to falling housing market

Jeonse tenants at risk due to falling housing market 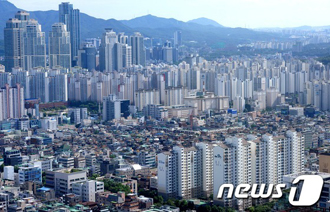 In a conference room of an apartment building in Namyangju, Gyeonggi, about 10 tenants were gathered with gloomy faces.

Last month, they heard from the agency that their apartments are in danger as the agency failed to pay back the money they took out to purchase the apartments.

They told the tenants to purchase the apartments outright because it is almost impossible for them to get the jeonse money back if the apartments are seized by the bank and put up for auction.

They then introduced people who could give legal advice and officials from savings banks who were holding mortgage program brochures.

“I think you are eligible to borrow up to 300 million won,” an official of the agency told the tenants. “I suggest you make a contract by the end of next week.”

“I decided to live as jeonse because I heard that the unit’s listed price is high,” a tenant told the JoongAng Ilbo. “I can’t believe that I could not get my jeonse money back if I don’t purchase this apartment.”

Due to the recent dip in the country’s housing market, many unsold apartment units were seen as an opportunity for real estate investment agencies to make money.

Many real estate investment agencies bought unsold apartment units in Namyangju, Yongin and Gimpo, Gyeonggi, from constructors at prices discounted by 30-40 percent from their listed price, thanks to the depressed housing market, and put them on the jeonse market.

The agency in Namyangju bought 26 units. Each unit was listed for about 630 million won, but they were able to get them for 430 million won.

The agency sold 15 of them and put the other 11 up for jeonse rent. Most of the capital the agency used to buy the apartments was borrowed from savings banks and some of it was covered by jeonse tenants’ deposit money.

According to the Ministry of Land, Transport and Maritime Affairs, the declared value for a Namyangju apartment unit is 416 million won as of 2011, which is about 60 percent lower than its value in 2007. Real estate agencies in the region estimated that one apartment is expected to be auctioned off for around 300 million won.

Even though the apartment is sold, it is almost impossible for jeonse tenants to get their money back because they are the junior creditor in this case and the law provides no protection.

“We feel sorry for the jeonse tenants,” said an official of the real estate investment agency. “We wish that we could generate some revenue in this investment, but we already lost 1 billion won last year.”

The real estate agencies warn jeonse tenants not to trust the listed value of the apartments.