Why not a woman president?

Why not a woman president? 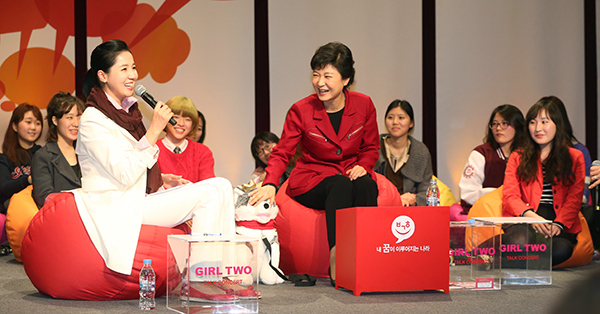 People are forgetful. We even forget things that happened in the not-so-distant past. The discussion over electing a female president reminds me how forgetful we can be. Until a decade ago, politics was dominated by men, and they had secret talks and made collusive deals over drinks and cigarettes. A female leader was considered something that could only be found in a myth or a strange, distant land with bizarre politics. One woman who claimed that a female could become president was derided. But she kept repeating that opinion and finally became a presidential candidate. She is the Saenuri Party’s Park Geun-hye.

When Park turned down the appointment as deputy party chairman and decided to run in the chairman election in 2000, men were perplexed. It was a time when most female politicians would have gladly taken a position offered by male leaders. They didn’t tolerate her challenge. When a man sought power, he was considered ambitious. When a woman did the same thing, she was called greedy.

The Grand National Party, now the Saenuri Party, treated women like second-class members. But Park finished the primary second in a very close match. Then she said: “Now, it wouldn’t be so strange for a woman to be elected president.” She startled the men by declaring that she would run in the presidential primary in the following year. She said, “When a woman becomes president, I can only see merits and not one fault.”

Han said, “I am older, but you are senior in your political career.” Park replied, “I hope you will embrace the citizens’ hearts and become a successful prime minister.” Han said, “Many women now have a chance to pursue careers thanks to your pioneering role in the Korean political structure.”

Han, the godmother of the women’s rights movement in Korea, called Park a “pioneer.” She was indeed. While she was the head of the party, politics and policies became more equal for both genders. Whether she intended it or not, changes were made because of her. Opposition parties also followed her example. Former Prime Minister Han ran in a party leadership election when Park was running. When Park was leading the party, Han was the head of her party. It became an unspoken rule that a female leader becomes the face of a party at a time of election or other crisis. Shim Sang-jeong and Lee Jeong-hee also played this role.

Politicians are not the only ones who changed. Because of a backward tradition in journalism at the time, female reporters covered girly beats. But suddenly, young female reporters got the chance to cover politics for the first time. Many of them remain political news writers. Women got to participate not only in politics itself but also in interpretation and explication of politics.

These changes would have been made eventually even if Park hadn’t pursued a career in politics. However, the changes would have been more gradual. Park may have reached her current position thanks to her privileged political background. But she has obviously lived through adversity as well. Other female politicians have risen and disappeared, but Park Geun-hye remains a power. Korea is shamefully ranked 108th among 135 countries in terms of gender equality. But in politics at least, Park’s presence illustrates an improved status of women.

When Park said, “An election of a female president is the biggest change and most significant political reform,” it was unfair for opposition politicians - especially those who were involved in the women’s rights movement - to criticize her for having done nothing for women. If they knew the history and still criticized Park, they abandoned their principles as champions of women’s rights. It is hard to argue with Park’s claim that a female president can bring greater changes than a female party leader as the chief executive has greater influence than a party leader.

Her authoritarian leadership can and should be criticized. Nevertheless, it would be foolish to condemn her for “lacking femininity” or being a “limited representation of women.” According to the opposition’s standard, Margaret Thatcher and Golda Meir - who displayed masculine leadership - and Angela Merkel and Julia Gillard - who did not give birth or raise children - are all unfitting female leaders.

Moreover, the opposition party recently considered using the slogan, “The man of the Republic of Korea” for the presidential campaign. It is based on a subconscious rejection of a woman as president. We see what they’re wearing on their sleeves - and it’s not a heart.

*The author is deputy editor of political and international news of the JoongAng Ilbo.
By Ko Jung-ae