For uninitiated, a primer on Gangnam’s style

For uninitiated, a primer on Gangnam’s style 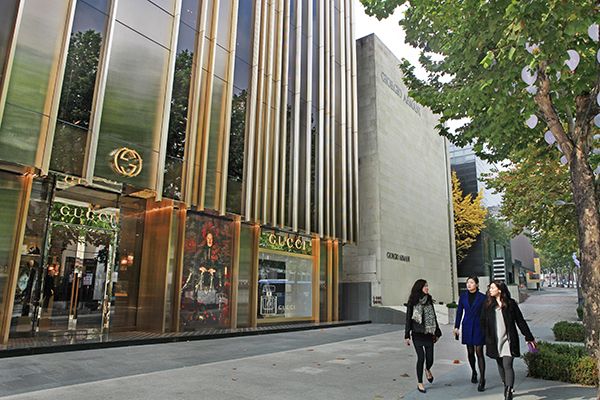 The upscale fashion and business street in Cheongdam-dong is known as Seoul’s Champs-Elysees.


All it took was one music video by an unthreatening 30-something rapper with a catchy song and contagious, silly dance to lift Gangnam from obscurity and make the nouveau riche district of southern Seoul an international tourist destination.

Last year before “Gangnam Style,” Myeong-dong drew the most foreign tourists, followed by Dongdaemun Market, Namdaemun Market, palaces and Mount Namsan, according to the Korea Culture and Tourism Institute. Lotte World, an amusement park in Songpa District, southern Seoul, was the only attraction south of the river to draw more than 20 percent of the foreign visitors to Seoul last year.

However, Psy’s hit sensation has raised both awareness of Gangnam and a desire to visit the place that inspired the K-pop phenomenon. According to a recent Korea Tourism Organization survey of 200 people living in New York and Los Angeles, more than 90 percent of respondents have either seen the music video or heard “Gangnam Style,” and 60 percent of those said they want to visit Gangnam. When asked what they would do in Gangnam, those surveyed said “shop for luxury goods,” “go to a spa and a hair salon” and “go clubbing.”

Good answers, for sure, but there are other, less well known sides to Gangnam. This second in a three-part series explores six reasons why “Psy’s Place” is so special.

A dichotomy of old and new

In Korean, Garosu-gil means “tree-lined street.” As the name suggests, Garosu-gil’s main street, which stretches less than one kilometer (0.6 mile), is lined with gingko trees on both sides, creating a beautiful promenade in the middle of the city.

Compared to other streets in Gangnam, which are more modern and grand in scale, Garosu-gil presents a dichotomy of the old and new. Probably because it was home to art galleries in the 1980s, the area still dazzles visitors with its collection of quaint stores and unique bohemian atmosphere, even though new stores have begun to arrive in recent years.

The area is also home to many fashion designers who started off with a small store on Garosu-gil before launching their own brands. They are said to have studied abroad and returned in throngs in the late 1990s and 2000s to create the current Garosu-gil, which many Koreans claim resembles SoHo in New York.

There also are numerous European-style cafes, restaurants and bars that attract swarms of young Koreans throughout the day. Usually, young Korean women visit the area during the day for brunch or to grab a cup of coffee, while the nightlife of the area is led by young men and women in fancy outfits drinking in open-air bars.

To get there, get off at Sinsa Station, line No. 3, exit 8. Walk five minutes before turning left onto Garosu-gil.

Plastic surgery clinics here are known to attract not only locals, but foreigners who want to have their noses tweaked, jaws realigned and fat removed, which occasionally gets grafted onto their faces. The clinics have a reputation for highly skilled doctors who work with top-notch technology.

Care for some high culture?

This peaceful park was established in 1973 to commemorate the legacy of Ahn Chang-ho, a famous independence activist (his pen name was Dosan). Art galleries began to locate around the park after Atelier Hermes opened its doors in 2006, and today there are about 10 galleries and auction companies. Art galleries that are located in the area include, Space*C coreana art & culture complex, Horim Museum, Gallery Simon and I M Art.

The area is adjacent to Cheongdam-dong’s high-end fashion street, which leads luxury brand shoppers to stop by the art galleries, known as the symbol of “high culture.” Although smaller, many Koreans liken the Dosan Park area to New York’s Central Park.

Until the 1980s, the home to art galleries was Insa-dong in central Seoul. However, as Insa-dong became saturated, galleries began turning to the tranquil area near Dosan Park. If the saying is true that art collectors prefer visiting galleries in a secluded area where they can avoid public notice while purchasing paintings, the Dosan Park area fits the bill. 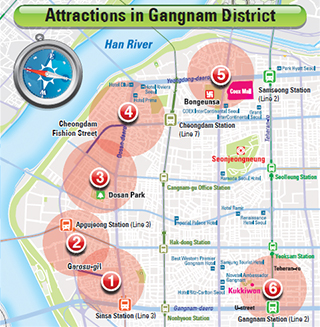 Lined with the stores of Gucci, Escada, Cartier, Ferragamo, Giorgio Armani, Louis Vuitton, Prada, Jil Sander, Dolce & Gabbana, and many other luxury brands, the high-end fashion street in Cheongdam-dong is Seoul’s Champs-Elysees. Not only is the street lined with stores on both sides, its outside decorations, especially during the Christmas season, attract those who either could not or would not spend millions of won on a bag or shoes. Known by locals as the “Special Fashion District,” the street attracts industry leaders and enthusiasts and is the site of various fashion-related festivals and events each year.

Aside from fashion, Cheongdam-dong is renowned for purveyors of high-end total beauty products and services from nail art to skin care. Top-notch beauty shops provide comprehensive luxury services to international tourists. The neighborhood area next to this street of luxury goods was recently designated “Hallyu Star Street” by the Gangnam District Office. Because two of the Korea’s major entertainment agencies - SM and JYP - are located here, the street is frequented by celebrities. It has become one of the most popular places for K-pop fans to catch a glimpse of their favorite stars.

Underneath Korea’s World Trade Center in Samseong-dong in the main business district of Gangnam is the COEX Mall, Asia’s largest underground shopping center. It is nearly 15 times larger than the Olympic Stadium. It has virtually everything from clothing and cosmetics to mobile devices, flowers and eyeglasses. Tourists looking for name brands should check out the Hyundai Department Store and COEX SKM Duty Free Shop.

The mall also offers a variety of leisure experiences. Voted the best cinema in Asia in 2004, COEX’s Megabox Theater shows a variety of movies from other countries, holds previews and hosts red carpet events.

Other visitor favorites are the COEX Aquarium and Bandi & Luni’s bookstore, the perfect place to kick back with a book and unwind.

COEX even has some unique cultural spaces, such as the Kimchi Museum, which provides visitors an opportunity to learn about Korea’s signature food and the culture that goes along with it.

Beside COEX, there’s Bongeunsa, a thousand-year-old temple in the middle of the city with the ambiance and tranquility of a temple in the mountains. It is an unexpected and pleasant surprise to find a temple of this size located in the frenetic sphere of the World Trade Center. Not to be missed is the Great Statue of Maitreya Buddha. It was built in 1996 and is the tallest stone Maitreya Buddha in the country.

Recently, many foreigners were spotted in the Gangnam Subway Station taking pictures - some even doing the horse galloping dance - in front of the sign “Gangnam.”

This subway station is one of the busiest spots in Seoul, serving as a transfer point between subway line No. 2 and buses to all over the city, Incheon and southern Gyeonggi. Therefore, the area surrounding the station is an important commercial and entertainment district. Brimming with shops, restaurants and street vendors, it is packed with people from morning until late at night. The area also is the location of the headquarters of such multinational companies as Google and Samsung.

Because the area also has one of the highest concentrations of hagwon in Seoul, high-powered businessmen and women rub shoulders with hordes of backpack-toting students going to and from private academies.

The main street, Gangnam Boulevard or Ubiquitous Street or Digital Media Street (it has many names), has been designated as a digital testing lab for the Seoul Metropolitan Government. On both sides of the street, there are tall media poles that are part of the world’s most advanced digital signage system. They act as Wi-Fi hot spots and allow people to take pictures, play games, search for traffic information and study maps.