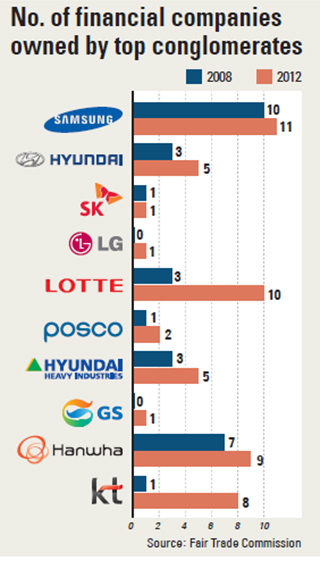 Since the global crisis in 2008, the number of financial companies excluding banks owned by leading conglomerates like Samsung Group and Hyundai Motor Group has increased by more than 50 percent.

According to a study by the civic group Citizens’ Coalition for Economic Justice, the number of financial companies owned by leading conglomerates as of this year amounted to 112.

While Samsung Group has the largest number of nonbanking financial companies, including Samsung Life and Samsung Securities, under its wing, Lotte and telecommunications giant KT have seen the largest increase in the past four years.

Lotte Group had 10 financial affiliates as of this year including Lotte Card, up from seven in 2008. KT’s financial companies have also jumped from one to eight over the same period.

But more alarming is that the founding families of the conglomerates and top executives have a controlling influence over these financial companies despite their relatively small shareholdings.

The founding families and top executives were found to own just 2.5 percent of the financial companies as they held collective stakes worth 400 billion won ($367 million), while the total capital of the companies amounted to 15.3 trillion won.

The financial companies were mostly controlled through nonfinancial affiliates that held more than 50.5 percent stakes of them.

“Although there has been talk about stepping up regulations on nonfinancial companies to stop the founding families or top executives from wielding such influence on the financial companies, there has never been any official follow-through due to strong protests by the top chaebol,” said an official at the civic group.

“The conglomerates are in fact becoming more influential in the nonbanking sector, such as credit card companies, insurers, brokerage firms and even savings banks,” the official said. “The large business groups have been using the capital they generate from their financial companies to expand.”

The fact that conglomerates have excessive clout when it comes to their financial affiliates has been raised repeatedly as an issue, with critics saying the owning families can use the financial companies as their de facto piggy banks.

Others say the chaebol can deter fair competition by having their affiliates take care of all their financial service needs.

The point was raised again last month by ruling Saenuri Party lawmaker Ahn Deuk-soo during the National Assembly’s audit of the financial regulator. Ahn drew attention to the fact that Samsung Group had allotted a huge portion of its employees’ retirement pensions to Samsung Life.

“This kind of practice threatens the order of the financial market, so regulators need to act fast to clear it up,” Ahn said at the hearing.