Djokovic says rivalry with Andy Murray is one for the ages

Djokovic says rivalry with Andy Murray is one for the ages 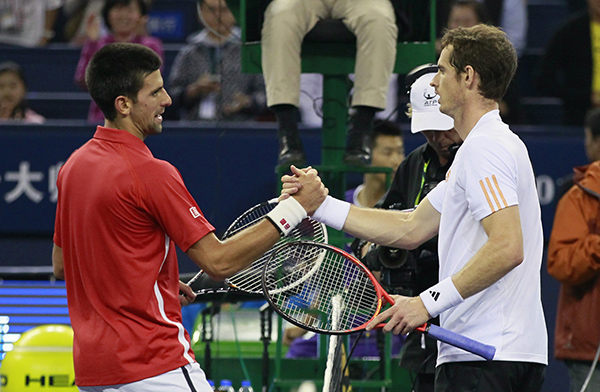 Novak Djokovic, left, and Andy Murray shake hands after their men’s singles match at the Shanghai Masters tennis tournament in Shanghai, China, on Oct. 14. Djokovic won the latest of the rivalry with Murray, beating the Briton 2-1 during the ATP Tour Finals in London on Wednesday. [AP/YONHAP]


LONDON - Novak Djokovic believes his rivalry with Andy Murray is developing into one of the sport’s all-time great match-ups after the world number one edged their latest dramatic encounter at the ATP Tour Finals.

Djokovic and Murray pushed each other to the limits on Wednesday in a bruising match which could have gone either way before the Serb eventually prevailed 4-6, 6-3, 7-5 in two hours and 34 minutes at London’s O2 Arena.

It was the latest in a growing list of memorable meetings between the two 25-year-olds, who have been on-court rivals and off-court friends since first meeting at an Under-12s tournament in the south of France.

In 2012 alone they have clashed seven times, with Djokovic starting the year with victory in the Australian Open semifinals and Murray getting his revenge with an Olympic last four win and then, even more significantly, a five-set triumph over the Serb to win his first Grand Slam title at the U.S. Open.

And with Roger Federer approaching the end of his career and Rafael Nadal hampered by knee problems, there is every chance that Djokovic’s clashes with world No. 3 Murray will prove the sport’s most significant occasions for the rest of the decade.

“It was another great match and another great performance from both of us,” Djokovic said after his 10th victory in 17 meetings with Murray.

“I didn’t expect anything other than a tight match that went to the wire. I don’t think I played bad in the first set. It was him playing really well, serving extremely well.

“He could have easily been sitting here as a winner. But that’s something that you expect when you’re playing at such a high level.

“We have a great rivalry that hopefully will develop even more in the future.”

Djokovic admits his matches against Murray carry even more emotional meaning for both players because they have spent so long chasing the same dream of being the world’s best.

“Of course,” Djokovic said. “We know each other so well. The friendship goes for long time, since we were 11 years old.

“More or less we developed into the professional tennis players at the same time. So, as I said, hopefully this rivalry will evolve and we can have many more great matches on the tour.”

Murray believes the regularity of their meetings in the latter stages of tournaments and the knowledge each has about the other’s game after so many encounters has added an extra edge to the rivalry.

“I think both of us probably see each other’s games pretty well. Especially this year, because we’ve played so much. You kind of know a little bit what to expect,” Murray said.

“That’s why all the matches, especially the last few, have been so close and decided by a few points.

“The intensity of my matches with him have been extremely high this year, there’s a lot of long rallies, and the matches are incredibly tight.”

With so much at stake whenever they meet these days, the desire of both players to be top dog is clear for all to see and the frustration of defeat was etched on Murray’s face as he trudged off court.

But, while the losses may sting for a time, Murray insists there is no chance of the rivalry damaging their friendship.

“I don’t know if losing these matches hurts more or not,” Murray said. AFP