Knights are shining in KBL as fan base awakens

Knights are shining in KBL as fan base awakens 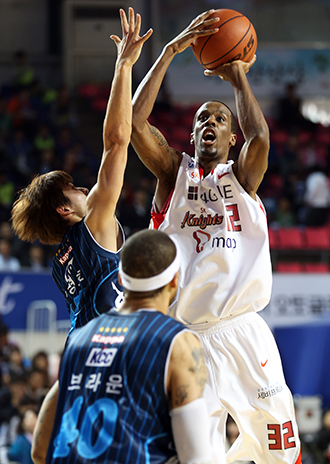 Aaron Haynes of the Seoul SK Knights shoots over the defense of the Jeonju KCC Egis during a Korean Basketball League game in Jeonju on Wednesday. The Knights won 80-54. [YONHAP]

Thanks to a star-studded roster and a stadium in the heart of the capital, the Seoul SK Knights have been one of the Korea Basketball League’s most popular teams for years. But the impressive fan base has seldom coincided with an impressive performance on the court - until now.

The Knights, who fell into a slump since their runner-up finish in the 2001-2 season, have emerged as the favorites to win the 2012-13 season with an impressive 9-2 start.

The Knights routed the Jeonju KCC Egis 80-54 Wednesday night, extending their winning streak to four and building a formidable 9-2 lead in the 10-strong league. The Incheon ET Land Elephants are at 8-2, but it’s the Knights’ dominance on the court that has caught the league’s attention.

It has been quite a comeback for the 1999-2000 title winners who have made the six-team playoffs only once in the past 10 seasons. Last year, it finished in ninth in the league.

The rebirth of the Knights came after Moon Kyung-eun, a franchise star, took the helm early this year on a three-year contract, a year after he began as an assistant coach for the team.

Moon, 41, earned his fame for his clutch shooting, recording 15.5 points per game including 2.8 3-pointers during his 14-year career. He has changed the dynamic of the team through his unconventional one guard, four forwards system.

Kim Sun-hyung, a second-year guard, has pulled the string for the big men in the paint. Kim Min-soo, Park Sang-oh, Choi Bu-kyung and Aaron Haynes make up the starting four, all big men with experience.

The forwards have each made nearly identical contributions to the strong start to the season with Kim Min-soo averaging 10.2 points and 4.5 rebounds, Choi 9.1 points, 5.5 rebounds and Park 8.4 points and 3.5 rebounds.

Haynes, the 31-year-old who played for Boise State in the United States, is playing in his fifth season in the KBL and has been the star so far.

He is averaging 19.4 points and 8.9 rebounds per game. Haynes is the second-highest scorer so far this season.

Moon said he made the decision to implement the unique system because of the absence of a center and said he thought it could be a good option after watching the NBA postseason matches earlier this year.

He said he wanted to emulate the playing style of the Los Angeles Clippers or the Oklahoma City Thunder in the National Basketball Association.

The impressive run has reinvigorated the Seoul fan base. The Knights, who brought around 160,000 spectators last season, the most among the 10 clubs for the fourth straight year, already has drawn in 34,561 people to Jamsil Students’ Gymnasium in a total of six home games so far. Twenty-one more home bouts are left for the team before the regular season ends in March.

“It is important that the young players get to know how sweet it is to win,” Moon said.

Moon said it is still too early to set the bar high, saying his goal is to lead the team to the playoffs first.

The Elephants are also putting on the pressure. The Incheon club beat the Goyang Orions 78-70 on Wednesday, trailing the Knights by half a game.