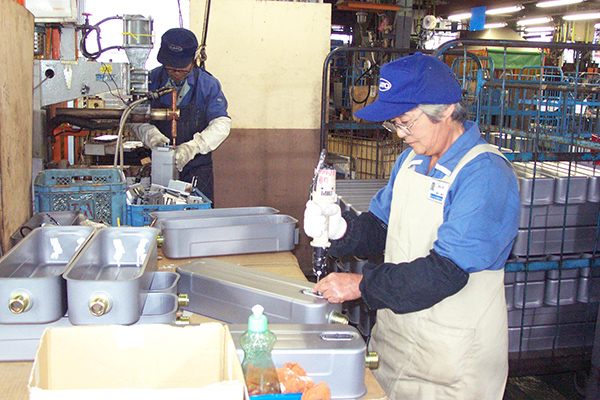 I am a fan of “Hoko Tate,” a television show on Fuji TV. It is a program that highlights the power of small- and medium-sized businesses in Japan. The show, whose title means “A Spear Versus a Shield,” is about a showdown between two companies. For example, a drill company claims there is nothing in the world its drill cannot puncture. And a metal company counters that nothing can penetrate its product. After an initial match, the loser improves technology for a few months and challenges the winner again. The show is all about the pride of small, solid companies.

We often say the Japanese economy is going through “two lost decades.” Average annual growth is 1.2 percent. Deflation is serious, and the yen is so high.

However, from a different perspective you might wonder how this ailing economy could save itself from total meltdown for 20 years. The structural core may be rotten, but companies seem to stand strong. The answer is simple. The economy has lost vitality, but its potential energy remains. And the backbone is the small- and medium-sized businesses.

Ninety-nine percent of registered businesses in Japan are small and midsized companies. They hire 80 percent of the workers and generate 53 percent of added value. Of those companies, 22,000 have been in business for more than 100 years. Korea’s small businesses last an average of 10 years.

Taiyo Manufacturing in Sakai, which produces mechanical parts, offers two awards every six months. One is the “President’s Award,” and the other is the “Great Failure Award.” Each prize winner receives 20,000 yen ($250). Nineteen years ago, Mr. Yamane received the first Great Failure Award after his new project incurred 50 million yen in losses. But lessons learned from the failure generated profits several times that loss in the following year. Mr. Yamane is now an executive at the company. Thanks to a pioneering spirit, the company now has annual revenue of 4.5 billion yen.

The power of small business in Japan has been universally nurtured. The government recognized the importance of small- and medium-sized companies, and the companies endeavored to improve capacity and human resources.

With the Korean presidential election approaching, candidates advocate “economic democratization.” They claim it is the right time.

However, various populist regulations should not be turned into democratization. The ultimate goal is to revive the economy. The red light of a Japanese-style prolonged slump is on for the Korean economy.

We need to calmly ask ourselves if we can endure two lost decades. Do we have solid small businesses that can support the economy when the conglomerates are shaken?

*The author is the chief of the JoongAng Ilbo Tokyo bureau.
By Kim Hyun-ki