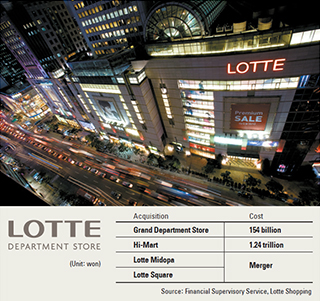 Retail giants Shinsegae Group and Lotte Shopping are both seeking future growth as they vie to claim top billing in the department store industry. But while they share a common goal, they are going about achieving it in different ways.

While Lotte is splashing out to expand its business in each retail sector and chasing mergers and acquisitions (M&A) at home and abroad, Shinsegae is marshaling its funds to secure plots of land nationwide on which to build a series of huge shopping complexes.

Although Shinsegae has yet to break even on this side of its business, it hopes to make such complexes its core profit generator in the future, it said.

In terms of capital, Lotte Shopping has a significant edge over its main rival. At the end of the second quarter, its liquid assets totaled 1.51 trillion won ($1.39 billion), dwarfing Shinsegae’s 15 billion won.

Lotte Group, the parent company of Lotte Shopping and the fifth-largest conglomerate by assets, said its liquid assets and cash amounted to 3.65 trillion won at the end of June.

Shinsegae admits its rival has considerably more resources at its disposal as Lotte also has a credit card company and supermarket chain under its wing, in addition to its department stores and discount chain.

Lotte Shopping is also investing over 1 trillion won of its sales each quarter, whereas Shinsegae cannot afford this luxury as it has been squeezed by sluggish sales in recent years. 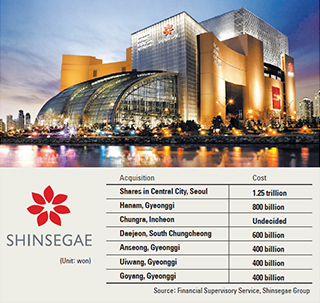 However, Shinsegae has proved adept at securing financing through loans. It borrowed almost all of the 1.02 trillion won it needed to acquire its outlet in Seoul’s Central City.

“Shinsegae Group borrowed huge sums from major financial companies such as Korea Development Bank on the understanding that the interest on the loans would be covered by dividends from its Central City outlet,” said an employee at Shinsegae, who declined to be named.

Lotte Shopping is making up for its weaknesses in the retail industry through a savvy series of corporate acquisitions both in Korea and overseas by drawing on its plentiful resources.

It also harbors shopping complex ambitions. It already operates one in Gimpo, a domestic air hub near Seoul, and has two more under construction in Songdo and Suwon, also near the capital, as well as a third in Shenyang, China.

“We are promoting a two-track expansion strategy for both brown and green field projects,” said a spokesperson for Lotte Group, adding that the former is being facilitated by M&A deals.

Shinsegae, on the other hand, is hoping to lay the groundwork for it to become the largest discount chain store in the country by snapping up real estate at a time when prices are low.

“Since last year, both have been experiencing cash flow shortages for the first time in their history. This is going to cause problems for their grand investment plans,” said Kim Kyung-ki, an analyst at Hanwha Securities.