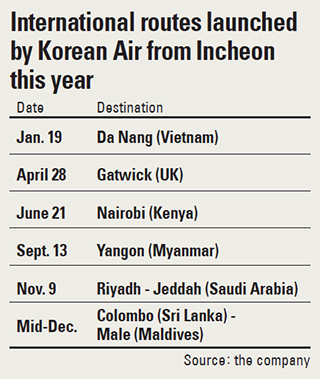 Despite the global economic slowdown and the rising cost of oil, Korean Air continues to open new international routes and add more planes.

This was the second time in the company’s history that operating profit surpassed 300 billion won. With 4.7 million passengers and an occupancy rate of 82 percent, it also scored two more quarterly records.

“The reason for our solid performance in the third quarter was that we expanded our long-haul routes with the deployment of new aircraft,” said CEO Ji Chang-hun during Korea Aviation Day on Oct. 30. “Our field of play should be global, so we will continue to launch long-haul international flights.”

Ji said that the company now connects 122 cities around the world, but by 2019 it aims to expand that number to 140.

Korean Air has opened six new international routes this year, adding flights to Myanmar and Kenya, and has two more in the pipeline before January. This compares to a total of five in 2011.

It will also resume direct flights to Saudi Arabia today for the first time since 1997. Korean Air will operate flights three times a week - on Mondays, Wednesdays and Fridays - from Incheon via Riyadh and on to Jeddah.

The company said that although these new routes might not generate profits instantly, it sees a promising future in the region.

“We resumed our flights to Saudi Arabia as demand from the construction industry is growing,” an employee from Korean Air said. “In partnership with Saudi Arabian Airlines, which is a new member of the airline alliance SkyTeam, we will expand our network in the Middle East.”

The company also expects the new flight to facilitate better business ties between Korea and Saudi Arabia. According to the International Contractors Association of Korea, more than 100 Korean builders have been carrying out 147 construction projects in the oil-rich country this year, but since there was no direct flight to the Middle East nation, local businessman had to take connecting flights in other countries.

The airline will also launch a new route next month, flying from Incheon to Sri Lanka and connecting to the Maldives as it predicts outbound tourism to these regions will grow.

For flights to Male International Airport in the Maldives, Korean Air temporarily operated chartered flights in 2010 in association with local hotels and resorts there, but growing demand from honeymooners and families led it to launch a flight there, it explained.

From January next year it will expand its business to Peru by launching a flight to Lima that includes one stop in Los Angeles three times a week, it said. It is reportedly planning to open another route to Indonesia and San Jose, California.

To prop up this level of expansion it has been expanding its fleet of carriers. Last year, it bought 16 new aircraft and it will have added a total of 14 this year, including one A380 and six B737-800s.

It currently has 120 passenger planes and 27 cargo planes. Among the former, 75 can fly without refueling for over seven hours, it said.