Lee urges Japan to repent for its wartime crimes

Lee urges Japan to repent for its wartime crimes 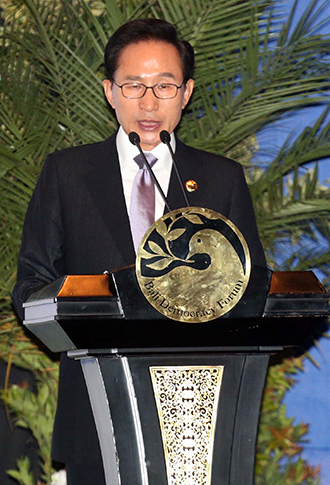 Lee issued the appeal in a keynote speech at the annual Bali Democracy Forum that opened on the Indonesian resort island, stressing that Northeast Asia should seek solutions to historic issues from the standpoint of universal human values and a correct understanding of history.

“That is why I have particularly urged violators of women’s human rights during wartime to seriously reflect on themselves. The perpetrator country should first make candid admission of its human rights infringement against” such sex slaves, Lee said, though he did not mention Japan by name.

“It behooves a mature democracy to transcend its own national interests in addressing universal human values. Such an act in fact would be conducive to raising its international standing,” he said in the address to representatives from about 70 countries in the region.

Historians say up to 200,000 women, mostly Koreans, were coerced into sexual slavery at front-line Japanese military brothels during Japan’s 1910-45 colonial rule. Moreover, former sex slaves, who are euphemistically called “comfort women,” have long testified to the hardship they were forced to endure.

Lee has increased pressure on Tokyo to resolve the grievances of the victims, saying the issue is becoming increasingly urgent as most victims are elderly, well over 80 years old, and may die before they receive compensation or an apology from Japan.

Lee made a similar appeal during a visit to Oslo in September, urging Japan to learn from Europe and resolve colonial-era grievances. He said at the time that post-war Europe was able to heal its wounds and bond closely together as there was heartfelt repentance from the wrongdoer.

Japan has been ignoring Seoul’s demand for official talks on compensating the aging Korean women, claiming all issues regarding its colonial rule were settled in a 1965 package compensation deal under which the two countries normalized their relations.

In an interview with the leading Indonesian newspaper Kompas published on its front page yesterday, Lee also said he has “concerns about historical perceptions of human rights violations suffered by ‘comfort woman’ victims, and the human rights situation in North Korea.”