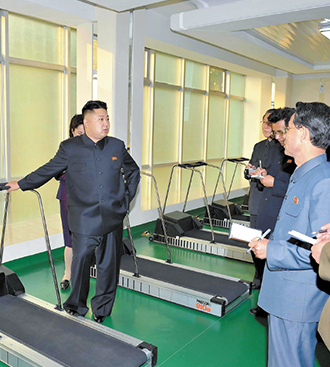 North Korea leader Kim Jong-un inspects a U.S.-imported Precor treadmill installed at a newly-opened health center in Pyongyang on a broadcast by the North’s Korean Central News Agency on Sunday. Kim, who encourages his military to chant anti-U.S. slogans, may be sending an appeasing message to the United States through this footage which clearly shows a U.S. brand, say experts. The news agency did not specify the exact date the shot was taken. [YONHAP]