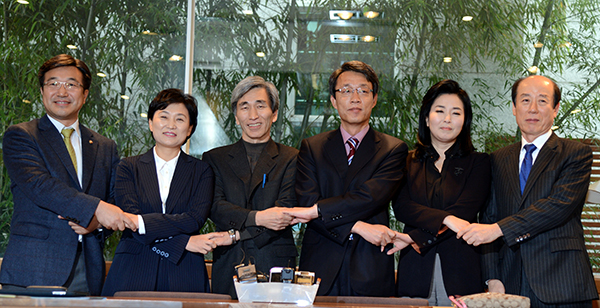 Negotiators from both the Moon Jae-in campaign and Ahn Cheol-soo campaign hold hands yesterday at a cafe in Seogyo-dong, western Seoul, before they begin the first working-level talks to iron out how to field a single candidate. From left: Yun Ho-jung, Kim Hyun-mi and Jung Hae-gu from Moon campaign, and Kim Sung-sik, Kim Meen-geon and Sim Ji-yeon from Ahn campaign. [NEWSIS]


Negotiations over political reforms to bring together the Democratic United Party presidential candidate Moon Jae-in and independent Ahn Cheol-soo kicked off yesterday, but bickering began between the two sides.

Working-level negotiators from the two campaigns sat down for their first round of meetings at the cafe Changbi in Seogyo-dong, western Seoul, in the morning and began discussions on creating a joint declaration on new politics. 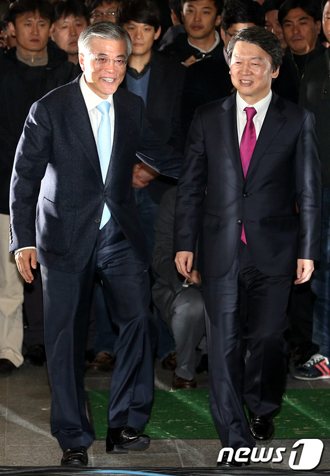 The declaration will serve as a political reform blueprint for Korea, and it is intended to unite the supporters of the two sides behind one of the two men as presidential candidate.

It is expected to deal with such reforms as Ahn’s proposal to lower the number of lawmakers and scrap the central leadership system of political parties. While Moon has been reluctant to go as far as Ahn, the two candidates have announced similar ideas to limit the powers of the president, legislature and political parties. Both have also suggested radical reforms in the way parties nominate candidates for elections, one of their key powers.

“The leadership of the DUP has excessively strong authority,” said Jung Hae-gu, Moon’s chief negotiator. “They need to give up some of that.”

Kim Sung-sik, chief negotiator for Ahn, said delivering political reform is the only way that liberals can win the presidential election. “We will do our best to give hope to the people for a new politics that speaks for the people and supports the people’s livelihood,” he said.

Moon yesterday outlined steps in the process of merging the two campaigns. According to Moon, the first step will be the announcement of the joint declaration on new politics. After that, each campaign should present its policies and the common values and policies shared by the two candidates will be disclosed. The final step will be the announcement of how to decide whether Moon or Ahn will run, Moon said.

At a meeting of DUP regional chapter heads, Moon said it is desirable to space out the steps. Sources from his campaign said the two sides should announce the joint declaration in two to three days and begin the most important negotiations on the rules of the game to decide who will stay in the race.

Since both Moon and Ahn are scheduled to announce their campaign pledges on Sunday, Moon wants to complete the joint declaration before the weekend. It is unclear if Ahn will go along with the Moon campaign’s timetable.

The Ahn campaign yesterday expressed displeasure at the pushiness of the Moon campaign.

In a radio interview with PBS, Jeong Yeon-sun, spokeswoman of Ahn, said the two candidates have not discussed anything yet on how to consolidate their candidacies except that they won’t insist on what’s advantageous for themselves.

“We are reviewing if there is enough time, but the deadline for candidate registration is Nov. 26,” Jeong said when asked about the possibility of a public primary to choose the candidate. “If the negotiation goes smoothly, we want to complete the process before registration begins, so that’s Nov. 24. If a primary is physically possible based on that time frame is something to think about.”

She also said yesterday that the working-level talks that began yesterday will only focus on the political reform blueprint.

Jeong also denied that Ahn will join the DUP or create a new political party.

Another Ahn spokesman, Yoo Min-young, also complained yesterday that the Democrats were feeding the media with groundless rumors about what was agreed to during a meeting between Moon and Ahn on Tuesday.

“I express serious regret,” Yoo said. “Even before the negotiations begin, the spirit of agreement is damaged.”

Jo Gwang-hee, Ahn’s chief of staff, telephoned his counterpart in the Moon campaign three days in a row to express displeasure, Yoo said.

Quoting DUP sources, some local media reported that Ahn would concede the candidacy to Moon this time and prepare for the presidential race of 2017.

Other reports said Ahn told Moon about the possibility of creating a new party.

Ahn barked at reporters Wednesday when he was asked if he had talked to Moon about a new political party. “I didn’t say so,” Ahn said. “Why would I?”

Moon’s spokesman said after the Moon-Ahn meeting Tuesday that the working-level team for the joint declaration will also negotiate the method of choosing the candidate, which the Ahn campaign quickly denied. The Moon camp eventually withdrew that claim.

Woo Sang-ho, chief public affairs official of the Moon campaign, said yesterday that the Ahn campaign was mistaken to think that the DUP was giving false information to the media.

The Saenuri Party yesterday continued to attack the Moon-Ahn alliance. “It’s been only 48 hours since the two candidates had their talks, but they are already fighting over the agreement,” said Ahn Hyoung-hwan, spokesman of the central election committee for presidential candidate Park Geun-hye. “It is no wonder because they started the consolidation process with a secret meeting.”

He said the rupture was expected because Moon and Ahn were just putting on a political show to maximize their chances of winning. “Politics should be predictable,” he said. “They must complete the merger as soon as possible.”