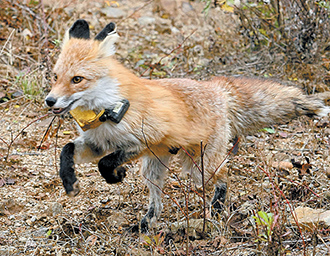 One of the two foxes released into the wild on Mount Sobaek on Oct. 31 By Gong Jeong-sik

The Korea National Park Service began its ambitious plan to bring back the endangered Korean red fox by releasing a pair into the wild, where it hoped they would thrive.

But six days later, the female fox was found dead in the mountains.

There are fewer than 30 red foxes in Korea, most living in zoos.

The Korea National Park Service, under the Ministry of Environment, released a male fox and female fox on Oct. 31 into Mount Sobaek National Park, located in both North Chungcheong and North Gyeongsang, in a “Born Free”-style project to restore the population of native foxes in the wild. 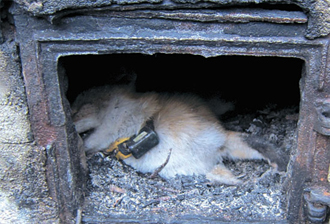 But on Tuesday, the young female fox that was released was found dead near a farmer’s house in Yeongju, North Gyeongsang, five kilometers (3.1 miles) away from the location of release, raising controversy regarding the timing and method of releasing the foxes into the wild.

The Korea National Park Service’s Species Restoration Technology Institute brought in the pair of foxes from the Seoul Zoo in April and trained them to adjust to life in the wild, teaching them how to hunt prey and avoid humans.

Through tracking devices, the institute had been watching the whereabouts of the foxes around the clock. They realized that the female had wandered far from the original point of release. Usually foxes stay within 500 meters to one kilometer of the spot where they are released.

The National Park Service sent the body of the 8-month-old female, weighing 5.8 kilograms (12.75 pounds) and tagged by the service as “KF-05,” back to the Species Restoration Technology Institute to determine the exact cause of death.

The institute said yesterday that the cause of death was respiratory failure. The fox suffocated from ash after climbing into a furnace at the farm, which she may have thought was a foxhole, according to the institute.

The fox was also bleeding in the stomach. The institute said she might have fought with another predator while hunting for prey. A mouse was found in her stomach.

“It is highly regrettable that the female fox died so young,” said Kwon Cheon-hwan, director of the Species Restoration Technology Institute. “After completely analyzing the cause of death, the future method of release of the foxes will be reexamined.”

The Environment Ministry plans to increase the number of native foxes to at least 50 by 2020 and intends to release more pairs into the wild, bringing in some foxes from northeastern China who are genetically identical to Korea’s native foxes.

Mount Sobaek was chosen as an optimal environment for the foxes because it has abundant food sources.

The species became nearly extinct in the 1960s and 1970s because of poaching and habitat loss.

The Park Service said the male fox has adjusted to conditions within one kilometer of the release point.