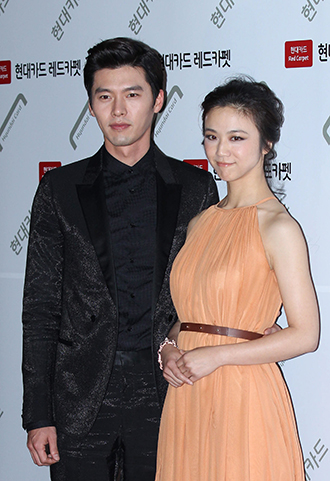 Chinese actress Tang Wei recently bought land worth 1.3 billion won ($1.1 million) in Bundang, Gyeonggi. It is rare for a non-Korean entertainer to snap up property in Korea. So, the purchase has lead many to wonder if love was the reason.

In particular, actor Hyun Bin, who was her co-star in “Late Autumn,” is being suggested as the top reason as to why Tang chose to buy land here.

Rumor has it that Tang visited Korea in April during the time that Hyun, who is serving in the Army, was on vacation.

To make the transaction, Tang had to obtain an alien registration card and be declared a temporary resident. Tang also attended the Busan International Film Festival, hosting the opening ceremony with Ahn Sung-ki.

Meanwhile, just yesterday, Hyun Bin’s release from the military and imminent return to movies was the talk of the town. With less than a month until he is discharged from the Army, rumor has it that Hyun Bin will sign with the newly formed O & Entertainment Agency, which actress Shin Min-a also calls home.