Shippers going under due to slump

Shippers going under due to slump 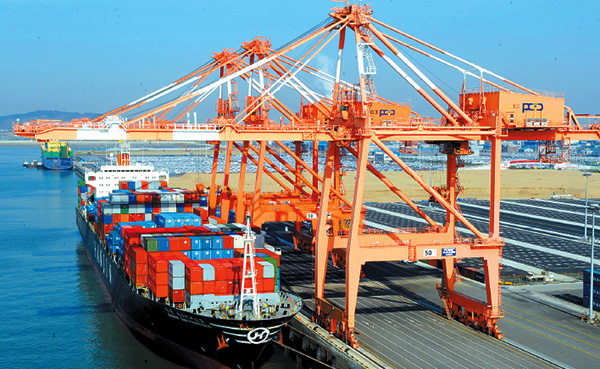 Korean shipping companies are moving fast to stay afloat as the recession in the maritime logistics industry looks set to stretch deep into next year.

Since the 2008 global financial crisis, the cargo business has been suffering a serious slump as sea freight costs have plummeted at the same time as fuel costs have risen.

The Baltic Dry Index (BDI), the daily average of prices to ship raw materials issued by the London-based Baltic Exchange, has dropped to one-fourth where it was in 2010.

Small and midsized shippers were hit especially hard amid this troubled situation. Among six firms that filed for court receivership last year, five have already declared bankruptcy. Korea Line was the only exception as it is still working to enhance its business performance.

Hanjin, the nation’s largest shipper, suffered a net loss of 339.6 billion won ($311 million) in the first half of this year, while HMM and STX were also hit hard with net losses of 456.9 billion won and 210 billion won, respectively.

Given the difficulties involved in generating profit in recent years, the financial health of these big freighters has been put in jeopardy.

According to NICE Investors Service, a local credit rating agency, the nation’s top six sea cargo carriers’ assets to short-term borrowing ratio plunged to 44.2 percent as of June. Considering the ratio was 298.5 percent in 2007, this means that cargo carriers have been piling up short-term debts while their assets have declined over the last five years.

To tackle their liquidity crises, major companies have been issuing corporate bonds.

But even with the bond issuances, some companies remain short of funds and recently had to find another way to raise cash to use as operating funds.

HMM on Oct. 16 had a board meeting and decided to increase capital by issuing new stocks. The company is reportedly set to issue 11 million new stocks at 19,900 won per share.

On the same day, Hanjin announced that it has borrowed a combined total of $2.3 trillion from Korea Development Bank, Korea Exchange Bank and Korea Finance Corporation. The company will suggest a freight bond which will be generated from a shipping deal with Posco, the nation’s leading steel maker, as a security.

According to a recent analysis by NICE, marine cargo volume is expected to increase by 6 to 8 percent next year, but cargo capacity of ships is also likely grow 8 to 10 percent.

However, sea logistics service providers, especially container carriers, are saying they will keep up their competitiveness by reducing operating costs and raising freight charges by adjusting shipping spaces.

“We know we can’t expect from the demand side,” Chung Bu-young, a market research director at Hanjin Shipping, said during the 31st World Shipping Market Outlook & International Forum in Seoul recently. “The key point is whether shippers are willing to control their cargo space and form alliances with others.”

To cope with the abundance of shipment capacity and rising fuel costs, carriers have been adopting a process called “slow steaming,” which means cutting their speeds from around 20 knots to 17 knots to save fuel.

“Unlike container shipping services, which require high-quality infrastructure, the bulk carrier business has a low-entry barrier,” said Koo Bon-wook, a researcher at NICE. “The competition is very intense in this market, so it’s difficult to keep freight charges up through partnerships.”

Bulk carriers are hoping that China will provide a breakthrough. As the incoming leadership governed by the presumptive new president, Xi Jinping, prepares to make its first moves, some economists have speculated that China will further expand its social infrastructure and economic development. This would require more raw materials in China, giving bulk carriers a lot of work to do.

“If China’s construction business gets a boost, demand for iron ore and bunker coal will likely increase,” said Yoon Suk-hong, a research team director at STX Pan Ocean. “We have big expectations regarding China’s plans to boost its economy.”