For surgeon, age is just a number

For surgeon, age is just a number 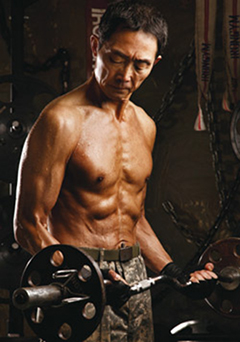 With a dark tan, he took his shirt off and held a barbell and stood in front of a camera to take a picture for his photo album.

When he showed his well-developed six-pack abs and arm muscles, people in the hospital, including his colleagues and patients, were impressed. Kim soon became a star in the hospital.

“People usually prepare for a downslide when they turn 60,” Kim told the JoongAng Ilbo. “But I think 60 is the golden age of life, when a person has wisdom and knowledge based on various life experiences. I wanted to show people that a person my age can be like a man in his 20s and 30s physically and intellectually.”

Kim said he started hitting the gym after he made a bucket list five years ago.

On the list, he promised himself that he will make a photo album of his progress toward getting a six-pack and learning four foreign languages before he turns 60.

It required a concentrated effort. Kim is a busy doctor whose days are filled with outpatient services, research activities, teaching, surgery and administrative tasks.

He went to the hospital an hour early so he could finish his work earlier and went to foreign language hagwon (private academy) three times a week to learn French, Spanish, Japanese and Chinese.

“I studied as I walked,” Kim said. “And I always carried my electronic dictionary to check words whenever I wanted.”

“Working out every day can make people tired, so I recommend people work out every other day,” he said.

The most difficult thing for Kim was the hunger from his diet.

“I first concentrated on reducing my weight because I heard that people like sinewy muscles like pop singer Rain rather than big, Rambo-style muscles,” he said.

“People sometimes said that I was able to pass the foreign language exams because I am a doctor. But I think the key was my constant effort. I had gone to four foreign language hagwon in the past five years, but I never skipped a single class as well as the physical training that I did three times a week.”

At the end of the interview with the JoongAng Ilbo, Kim said he will make another photo album when he turns 66, his retirement age at the hospital.

“I will study and work out more to show my improved intelligence and physical condition. Your age is just a number.”