In mummies, professor finds clues to our past

In mummies, professor finds clues to our past 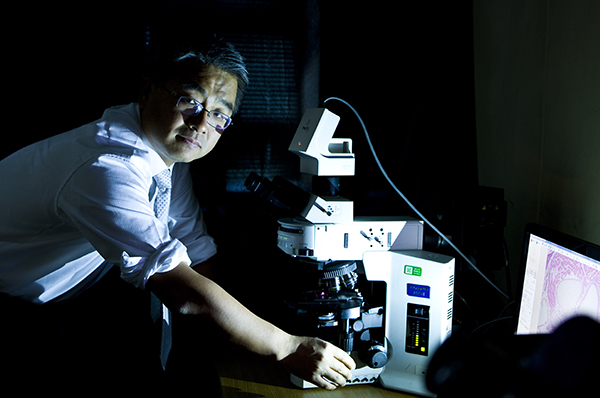 “My work focuses on looking at samples taken from excavation sites through a microscope. Help from archeologists was absolutely needed,” said professor Shin Dong-hoon. By Kwon Hyuk-jae


One day in 2001, while a grave was in the process of being transferred to another burial site, a boy mummy known as “Dan-woong” was discovered in Yangju, Gyeonggi.

Upon the discovery, the nation’s paleopathologists were rendered speechless and gathered around to see the mummified body. One of the observers was Prof. Shin Dong-hoon.

Though Shin majored in anatomy at Seoul National University and had been studying neuroscience, upon seeing “Dan-woong,” he changed his career path and decided to become a professor of paleopathology.

Paleopathology is known as the study of ancient diseases, but that’s not all. It also examines how ancient people managed their health and living conditions as well as what caused their deaths.

As the study is completed through fossil examinations of mummies and animals, paleopathology is a combination of archeology and medical science.

Although countries including the U.S. and France have long been the leading scholars in this academic field, Korea only just started researching it 10 years ago.

“Before, not many people were interested in it, and there was little knowledge of the research either. But as time passed and interdisciplinary studies developed, more precise results showed up and people gradually came to take notice of it,” said Shin.

In 2002, the world’s first-ever pregnant mummy was found in Paju, Gyeonggi.

Named the “Mother and son mummies of Papyeong Yoon’s family,” the mother was apparently pregnant with her baby boy when she died.

After an autopsy, it was determined harsh winter weather was the cause of death.

Such discoveries convinced the academic arena of paleopathology to conduct more intensive research on mummies.

Shin recently made an investigation into the hygienic life of people living in Hanyang (the former name of Seoul) during the Joseon Dynasty (1392-1910).

The research was carried out in collaboration with a team of professors from the department of parasitology of Dankook University.

They found that the skins of the mummies are so resilient that even after hundreds of years, they remain in the soil.

For the past four to five years, the research team has been traveling around the country and visiting excavation sites in order to analyze parasites.

They also collected skins of roundworms, whipworms and liver flukes on the grounds of the Seoul City Hall building and statue of King Sejong that were supposedly existent during the Joseon Dynasty.

“At the time of the Joseon Dynasty, the population was rapidly increasing and they didn’t have a proper sewage system so there was a high rate of parasitic infection.

“This hygienic problem was not just in Korea, but it was a crisis for the rest of the world as well,” said Shin.

Shin is planning to announce the examination results later this year.

“My goal is to show our ancestors living conditions through scientific means and to decode the messages they wanted to leave with us,” said Shin.