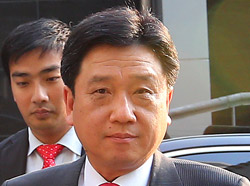 The special prosecutors said the extension is necessary because they need more time to question the first lady, Kim Yoon-ok, and also said they need to find out the exact source of the 600 million won ($550,000) that the president’s son Si-hyung borrowed from the president’s elder brother Sang-eun, the chairman of Das Corporation, when he purchased portions of land in Naegok-dong, southern Seoul, where the president’s retirement home was projected to be built.

“We judged that we need more time though we have been investigating for almost a month because there were many delays in operations, like questioning the president’s brother,” Lee Seok-soo, a spokesman for the independent counsel told the JoongAng Ilbo.

“We also need more documents from the Blue House.”

The Presidential Security Service of the Blue House led the Naegok-dong land purchase. The independent counsel’s 30-day probe will end on Wednesday but they can have 15-day extension upon the president’s approval.

During the prosecution’s initial probe, the president’s son testified that he had taken out a loan of 600 million won from Nonghyup’s Blue House branch. He said his mother’s land in Nonhyeon-dong, southern Seoul, was used as collateral.

The special counsel is looking into the suspicion that the president’s son paid less than his share when he jointly purchased the land, worth 5.4 billion won, with the Presidential Security Service in May last year.

The special prosecutor is expected to question the first lady about the loan. It is unclear whether the president will approve the prosecutors’ request. Sources said many officials in the Blue House have negative sentiments regarding the extension.