In Pyongyang, glimmers of life

In Pyongyang, glimmers of life 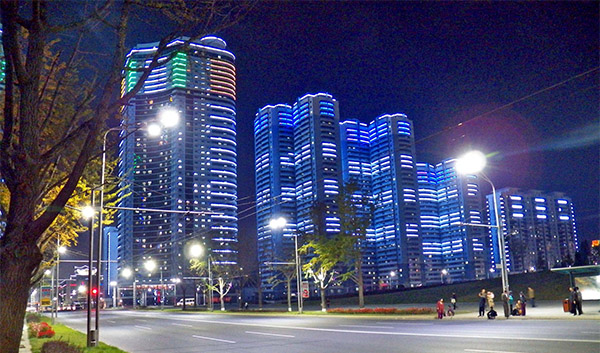 A seven-day trip by a group of overseas Koreans from Oct. 3 to 10 gave a rare look inside the capital of the reclusive regime since the ascension of leader Kim Jong-un. A high-rise apartment complex is lit up in a central part of Pyongyang, indicating that the electricity supply is not bad, at least in some neighborhoods.


A Korean-American JoongAng Ilbo reporter based in Los Angeles was invited to Pyongyang from Oct. 3 to 10 to mark the fifth anniversary of the Oct. 4 Declaration signed between President Roh Moo-hyun and North Korean leader Kim Jong-il in 2007. The seven-day trip by a group of overseas Koreans gave a rare look at economic changes since the ascension of leader Kim Jong-un.

It was the first visit by a South Korean media representative since Seoul imposed sanctions on Pyongyang on May 24, 2010, after the sinking of the Cheonan warship.


“As you know, the country [North Korea] is in extreme difficulty,” a high-level official from the North’s regime told a group of Korean-Americans at dinner on the first night of the Pyongyang trip. “Even if we make good-quality products, we have nowhere to sell them. Our sales are all blocked.” The official’s message: North Korea has had to tighten its belt under its “military first” policy, which puts the military’s strength as a top priority.

Another North Korean official told us, “With the ‘military first’ policy, we were able to possess nuclear weapons and therefore were able to escape the fear of war [and an attack from the United States].”

His greater message: “Now, we’re in an environment where we’re able to bet everything on the economy.”

The next morning, I saw that Pyongyang was more vibrant, modern and open to change than I had imagined. As I walked around the downtown area, various signs and slogans caught my eye. There were hardly any belligerent posters with messages like “Overthrow U.S. imperialism.”

The slogans were mostly about boosting the economy. “Let’s drop more sweat for the future,” read one. “Let’s reach out for more cutting-edge [development].” This one surprised me: “Quality first and quality second.”

It seemed that Pyongyang was in a campaign to increase overall production. It reminded me of South Korea’s Saemaeul Movement, launched in the 1970s by late President Park Chung Hee to modernize the rural economy. In Pyongyang’s Pyongchon District, a street is named “Saemaeul,” meaning “new community.”

As a reporter based in the U.S., the most interesting slogan for me was, “Set foot on the homeland’s soil and look out to the world.” This was a quote from a 2009 speech by late leader Kim Jong-il. I was told that this slogan was plastered on Pyongyang streets after the death of Kim last December.

Its alleged message: People should maintain their national identity while being more actively involved in adapting to changes in the world.

I noticed an advertisement by Pyeonghwa Motors, a joint venture by North Korea and the Unification Church, that read, “[Let’s] reach out to the world by gathering national strength.” The slogans were notable to me because North Korea is urging its people to think beyond its borders while, at the same time, the outside world is pressuring it to open up.

When I asked a North Korean scholar if these messages were part of efforts toward globalization, his face turned serious. The West’s notion of globalization would turn North Korea into a colony subjugated to some other country, the scholar explained. The North’s juche, or self-reliance ideology, cannot co-exist with that type of globalization, he said.

I sensed a more cheerful mood on the streets than I expected. Of the nine members of my group, four of the overseas Koreans had visited the North before. They all said it had changed a lot, with more cars on streets and more high-rise buildings.

Left: Students at a middle school in Pyongyang show visitors their English workbooks. Right: A pedestrian checks her cell phone as she walks on a street in Pyongyang. By Lee Won-young


The way people dress has changed - there are more bright colors - and they seem more energetic. The night view in Pyongyang has apparently become brighter, with fewer blackouts.

I could see construction here and there in the city. Some North Koreans carrying shovels to work waved to us. Loudspeakers broadcast exhortations to increase production. A band of middle school students held a street concert to encourage people on their way to work.

We looked around Changjon Street, one of the new prosperous areas in Pyongyang, with its high-rise apartment buildings. Our minders said some apartments were 100 pyong (3,600 square feet) large. A North Korean woman in her 20s, assuming we were tourists, approached us and showed us a box full of wild ginseng. “You just have to give me $20, that’s all,” she said.

We were told you can find almost everything in the markets because of an influx of Chinese imports, but when we asked to visit, out minders shook their heads. I wondered if they didn’t want us to see overly buoyant capitalism.

There were many foreign tourists in Pyongyang, mainly from Europe. A tourist from Sweden told us, “I visited after reading an advertisement online that North Korea welcomes foreign tourists. I sometimes feel uncomfortable because there is so much worshipping of North Korea’s leaders.”

We did not expect we would be able to take photos with North Koreans. We figured they would by shy of us because we dressed and spoke differently. But that was a misapprehension.

When one of our group tried to converse with some ordinary Pyongyang residents, they greeted us brightly. People were happy to have their photographs taken with us. Once, we heard loud music and tried to track it down. Inside a building, a wedding was being celebrated. The guests, who seemed to have had some drinks, were cheerful. We were worried that if we took out our cameras they would complain. But no one really cared. They were dancing and singing, and I thought that they knew how to enjoy themselves more than I do.

On a train, we met a woman who said she was a wife of a businessman. We told her that North Koreans seem to be friendly to strangers.

“Socialist people are different from capitalist people,” she said, smiling. “They are naive.”

A member of our group nodded and said, “It’s natural in a capitalistic society that people doubt others because there are many cheats and fakes. But here, people won’t have those kinds of experiences.”

We met young students memorizing English vocabulary on their way to school. We asked why since North Korea doesn’t like the U.S. One of the students answered, “English isn’t just an American language. It’s a global language.”

We also had conversations with North Koreans in their 20s and 30s. One of them, a 27-year-old female, shared with us trends among young people.

“These days, 70 to 80 percent of married couples are love matches,” she said, adding that divorce in North Korea is uncommon.

“People don’t divorce after marriage because once they do, they’re not considered decent people,” she said. “Also, the country doesn’t give permission [to divorce] very often.”

North Koreans we met were very honest and direct.

“I’ve heard that in capitalistic countries, there are many beggars and suicides,” said one man we met. “But here in our society, there are no such things like that.