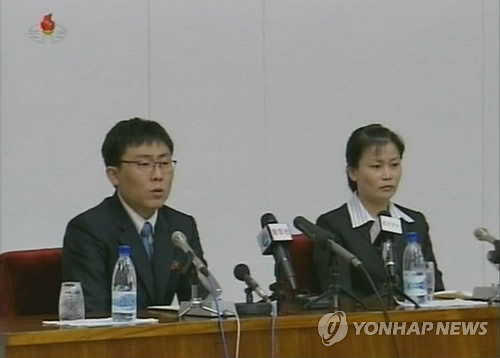 Seoul on Friday verified a North Korean media report that a couple who defected from the communist country and settled down in the South has returned to their home country.

The North's state-run Korean Central News Agency said a day earlier that the couple, Kim Kwang-hyok and his wife Ko Jong-nam, returned to North Korea on Sept. 12 after being lured to defect to South Korea in 2008.

Having viewed the video clip of a news conference featuring the couple and other information, they are believed to have been among defectors to the South, the Unification Ministry said.

"The Kim-Ko couple and his (two-year-old) son Kim Se-han are assumed to have flown to China in early September before entering the North again," ministry spokesman Kim Hyung-suk said in a briefing.

According to the ministry, Kim entered the South in May, 2008 while Ko came here in January the next year. They tied the knot in the South in July, 2009, after first meeting in the South.

Kim's mother and younger brother, both defectors from the North, are believed to be living in Daegu, a southern South Korean city.

The government said it is investigating the motive of the couple's return to the North, adding the South will make more efforts to help defectors adjust well to life here.

It is the third time this year North Korea has reported on defectors who fled to South Korea, but then returned home.

The country has publicized the returns, saying life in the South is bitter and uncomfortable. as part of its ideological campaign against the capitalist South.

More than 24,000 North Koreans have defected to the South in recent decades after traveling through China, Thailand and other Southeast Asian countries, government data showed. (Yonhap)