Troops in Abu Dhabi to stay one more year

Troops in Abu Dhabi to stay one more year 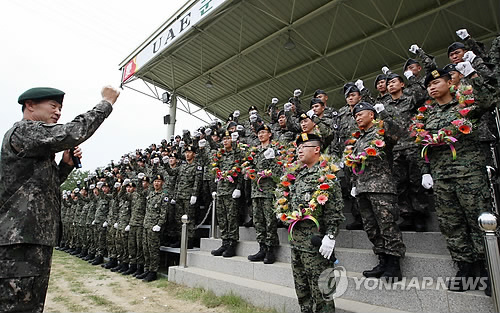 After a compromise between the ruling and opposition parties, the National Assembly’s National Defense Committee yesterday passed a bill to extend Korea’s military mission in the United Arab Emirates and provide support for the training of local soldiers for another year.

Over 150 Korean soldiers have been deployed in the UAE since last January to help train local troops to counter terrorism, hijackings and insurgencies.

The Korean special forces unit is named “Ahk,” the Arabic word for “brother.”

Their mission was set to expire at the end of this year. The bill passed by the committee will keep the unit in Abu Dhabi’s eastern city of Al Ain until Dec. 31, 2013. It still has to be passed by the National Assembly.

Previously, opposition Democratic United Party members on the committee opposed the extension, saying its point wasn’t to protect anyone, but the soldiers were dispatched for “economic and commercial reasons.”

DUP Representative Kim Jae-yun said earlier this month that the Korean troop deployment was “decided on an impulse” by Korea and the UAE, and asked whether the deployment was an under-the-table agreement between the countries.

The ruling Saenuri Party was adamant about the extension because Korea’s investments in the UAE were important for the country.

Since 2010, Korea has exported about 51.7 billion won ($47.5 million) worth of weapons and military equipment to the UAE, according to the Ministry of National Defense.

Korean troops have been deployed in areas of conflict over the years, including Iraq, Lebanon and East Timor. The UAE is the first country where Korea has deployed troop for reasons other than a war or conflict in the region.

The request for Korean troops to provide military training came after an agreement at the end of 2009 for a Korean-led consortium to build nuclear power stations in Abu Dhabi.