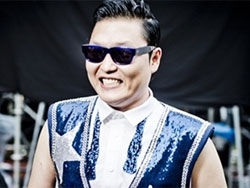 Since its release in July, Psy’s digital singles have been purchased more than two million times in the U.S., which earned him the certification by the Recording Industry Association of America, according to YG Entertainment.

Psy will continue his tour in the U.S. and Europe, his agency said. For this month, he performed his signature horse-riding dance during the MTV Europe Music Awards in Frankfurt yesterday. He will also perform in the American Music Awards in Los Angeles on Nov. 18, and NBC’s “The Tonight Show” with Jay Leno on Nov. 22.

The mega-hit shows no signs of stopping, with fever for “Gangnam Style” fast spreading across the world. Its music video is officially the “most-liked” video in YouTube history, smashing the Guinness World Record previously set by LMFAO, with over 4.6 million “likes.”

The video has also become the second-most-viewed video on YouTube, surpassing 620 million views and coming in just a notch behind Justin Bieber’s “Baby.”