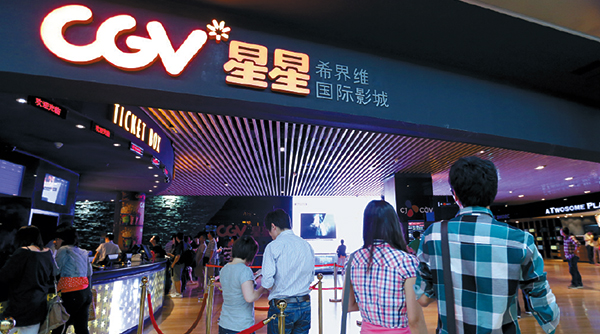 Customers stand at a CJ CGV cinema in Beijing. The company entered the Chinese market in 2006 in a joint venture.[JoongAng Ilbo]


CJ CGV, the operator of Korea’s largest multiplex cinema chain, will bring 15 Imax theaters to China as part of its efforts to tap the fast-growing market of Chinese moviegoers, company officials in Seoul said Friday.

Imax, the name of the company, also refers to a motion picture film format and a set of cinema projection standards created by the Canadian company.

Imax has the capacity to record and display images of far greater size and resolution than conventional film systems.

CJ CGV, an affiliate of CJ Group, plans to increase the number of multiplexes across China from the current 11 to 60 theaters by 2015. The number is expected to reach 15 by the end of this year, according to officials.

Due to its expansion plans, the company is expected to post losses in China this year and next year.

But its Chinese business will likely start turning a profit in 2014 as Chinese multiplexes have turned profitable after one year of operation, the company said.

CJ CGV started to expand its business in China in 2006, forming a joint venture with the Chinese state-owned studio Shanghai Film Group.

The number of Chinese cinema screens has increased from 4,753 in 2006 to 10,700 in 2011, according to data released by the Motion Picture Association of America.

Currently operating over 450 screens in Korea, the Korean firm opened its first overseas branch in China in 2006.

It operates a 650-seat multiplex in Los Angeles.

CJ CGV now has about 30 percent of the market share in Korea.