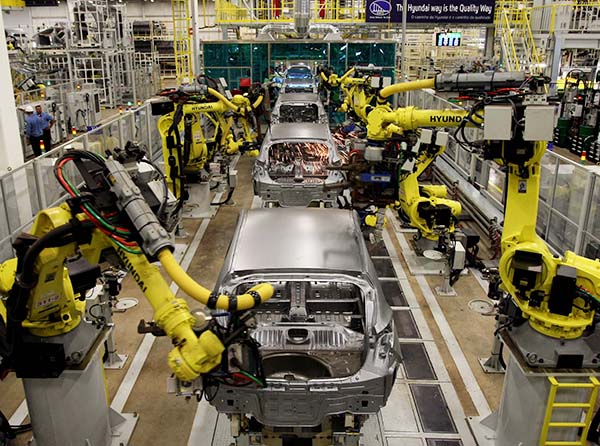 The production line of Hyundai Motor’s new plant in Brazil that was completed two years after breaking ground in 2010. The plant can produce 150,000 cars a year. [YONHAP]


With the completion of a plant in Brazil, Hyundai Motor’s manufacturing network now stretches from Asia to Europe, North America and South America.

Chung Mong-koo, Hyundai-Kia Motor Group Chairman, and top executives of the automaker were in Piracicaba, 160 kilometers (99.4 miles) northwest of Sao Paulo on Friday to celebrate the completion of the company’s first plant in South America, which has the capacity of producing a maximum of 150,000 vehicles a year.

Brazil is the fourth largest automobile market in the world.

“The operation of the Brazil plant will contribute to the Brazilian auto industry and the regional economy not only by creating 5,000 jobs but also aggressively fostering local auto part suppliers,” Chairman Chung said.

Michel Temer, Brazil’s vice president, said in a speech that Hyundai made the right decision to build a plant in Brazil. 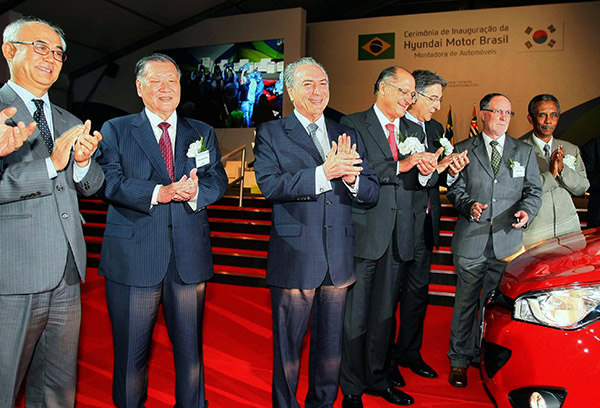 The Korean automaker invested a total of $700 million since breaking ground two years ago. The plant covers a 1.39-million-square-meter (15-million-square-foot) area.

The plant will produce the HB20, a small hatchback exclusively designed for the Brazilian market, as well as the HB20X, an SUV version.

Currently there are 120 HB20 dealers across Brazil, which will be increased to more than 200.

The Brazilian plant currently has 1,800 employees which will rise to 2,000 next year. An additional 3,000 jobs are expected to be created as eight of Hyundai Motor’s partners, including its own part supplying affiliate Hyundai Mobis, have set up operations near the plant.

With the completion of the plant in Brazil, the Korean automaker has a production capacity of 2.65 million cars around the world, including one million units in China, 600,000 in India and 300,000 in U.S.

“In any kind of crisis, we can now utilize flexible production strategies,” the company said in a statement.

Furthermore, thanks to the plant in Brazil, the Korean automaker can now compete with global automakers, including GM, on prices in one of the biggest automobile markets.

For that reason, other automakers including GM, Volkswagen and Toyota are making cars in Brazil. A decade ago, the South American country was the world’s 11th largest automobile producing country. Today it is the seventh.

This year Europe has seen its worst automobile sales since 1995. In the first nine months of this year, 9.7 million new cars were sold in Europe, 7.2 percent less than the same period last year.

The Chinese market is doing better than in Europe. Sales from the beginning of this year through October were up 3.6 percent compared to the same period last year. A total of 15 million vehicles were sold.

However, when compared to the double-digit growth that the Chinese market has enjoyed in the past, the market fell short of expectations.

The U.S. auto market has been showing signs of recovery and has been posting growth of more than 10 percent in the past few months.

But in South America, automobile sales in the first eight months of the year were up more than 20 percent.

The completion of the plant in Brazil comes at a sensitive time for the Korean automaker, whose image was dented recently over a controversy in the U.S. over mileage claims on its vehicles.

On Nov. 1, news broke that the mileage claims were inflated, hurting the company and its main affiliates on the local stock market. Hyundai Motor’s stock value plunged more than 7 percent to close below 200,000 won last Monday.

As a result Hyundai Motor lost roughly 3.4 trillion won of its market capitalization.

Fiat, which has the largest market share in Brazil, plans on increasing its production capacity to 1 million units by 2014.