More investments being put on ice

More investments being put on ice 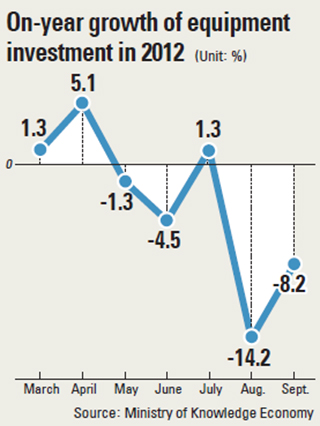 Businesses have cut back their plans to invest in facilities and manufacturing equipment as uncertainties in the economic outlook continue to deepen along with the approaching presidential election in December.

As the three leading candidates have spoken about “economic democratization” and encouraged businesses to expand their corporate social responsibility programs rather than branch out into new areas, many have adopted a wait-and-see attitude when it comes to chasing future growth.

Posco, the country’s largest steel maker, said it will cut 500 billion won ($459.5 million) worth of investment this year. It originally planned to invest 8.9 trillion won for the whole of 2012.

SK Hynix, the world’s second-largest memory chip maker, said it put off more than 4 trillion won of investment it had planned for this year due to uncertainties.

OCI, a major Korean manufacturer of chemical products stopped building two polysilicon factories in May to save 3 trillion won. Polysilicon is a the core material used to make photovoltaic products.

The company has not specified when it will resume construction.

Although the presidential candidates are also discussing ways to lift corporate taxes on companies that invest in facilities and equipment, many are still tightening their belts.

Korea saw negative on-year growth in facilities and equipment investment this summer, with the total amount dropping 14.2 percent in August and 8.2 percent in September, according to data released by the Korea Development Institute.

In the months leading up to Lee Myung-bak winning the presidential election in 2007 Korea saw a similar trend.

“One of the reasons businesses avoid spending before a presidential election is that they don’t want to be subject of claims later on that they benefited from preferential treatment by one of the candidates,” said Lee Cheol-hang, director of the Federation of Korea. “They don’t risk losing the confidence of investors.”

Director An Sang-hoon of the Korea Development Institute’s industry and competition policy said investment cuts can shrink the size of the industry in the short term, and downsize businesses’ capital in the long term.

“It’s hard to estimate when the impact of reduced investment will become visible in the country’s GDP or growth, but it does put a considerable strain on a country’s economic indicators,” said An.

“But as large sums of capital are needed to invest in facilities and equipments, businesses may just be waiting a few months while they amass funds and spend a lot more later,” he said.