Netflix holds its own as online and mobile content provider

Netflix holds its own as online and mobile content provider 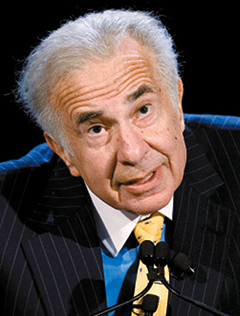 This 2007 file photo shows investor Carl Icahn, who disclosed last week he has a stake of nearly 10 percent in Netflix. The company responded by trying to protect itself against hostile takeovers. [AP/YONHAP]

Netflix, the world’s largest video-subscription service, increased its dominance of the online viewing market in a study, defying predictions that newer players would carve into the company’s market share.

“People are absolutely using their Netflix service,” said Dave Caputo, chief executive officer of Waterloo, Ontario-based Sandvine, a network services and research company. “I don’t know whose library is better or bigger, but it’s very clear that people use Netflix a lot more.”

The findings feed a debate between investors who laud the company’s early lead and international expansion and skeptics who cite slowing U.S. growth and losses in new foreign markets. Billionaire Carl Icahn said last week he holds an almost 10 percent stake in Los Gatos, California-based Netflix and views the stock as undervalued based on its market position and growth prospects.

Netflix has gained 12 percent in 2012 and is down 74 percent from a July 2011 closing high of $298.73. The company adopted a so-called poison pill takeover defense last week to prevent Icahn from buying more shares.

The rising popularity underscores the strategic advantage Netflix has gained with its online service and efforts to make streaming accessible on everything from televisions and game consoles to mobile devices. Sandvine said the company should maintain at least a tenfold lead over competitors through 2014.

The company’s share of peak Internet viewing traffic has climbed from 20.6 percent in the second half of 2010, Sandvine said. It stood at 32.7 percent a year ago. By comparison, Amazon’s market share amounted to 1.75 percent in September, while Hulu garnered 1.38 percent and HBO Go had 0.52 percent, according to the study.

U.S. households have more than doubled their monthly Internet use over phone and cable lines in the past year, consuming the equivalent of 81 hours of downloaded video, according to data compiled from 200 Sandvine customers.

Netflix CEO Reed Hastings said on Oct. 23 that despite more competition, many of his 30 million customers continue to watch more thanks to a mix of “better exclusive content, better member experience, and a clearer brand identity.”

“We are working to expand these advantages to win even more of these moments of truth when consumers decide on any given evening what service they turn to first when looking for entertainment,” Hastings said.

Joris Evers, a spokesman for Netflix, declined to comment on the Sandvine report.

In its 2012 first-half report, Sandvine predicted Netflix’s service had peaked amid competition from Amazon Prime, HBO Go and so-called TV Everywhere services from cable and satellite providers. Amazon, based in Seattle, grew from virtually nothing in streaming a year ago to become the ninth-largest bandwidth user, according to Sandvine’s Caputo.

“I thought the competitive threat would’ve been more significant against Netflix, but they seem to be holding their own,” Caputo said in an interview.