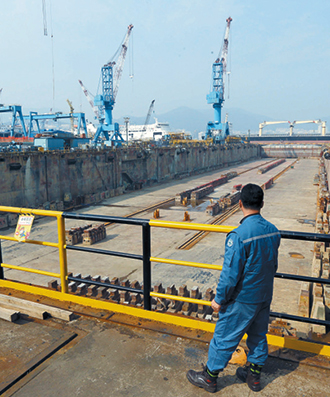 A worker at the Yeongdo Shipyard of Hanjin Heavy Industries in Busan looks out an empty shipyard. Some 92 laid-off workers were reinstated Friday, but will take a paid vacation as they don’t have work to do. The corporation has failed to obtain new contracts since 2008. By Song Bong-geun

BUSAN - The 92 fired workers at the Yeongdo Shipyard run by Hanjin Heavy Industries in Busan again donned their work uniforms for the first time in 22 months. The workers went through orientation at the corporation Friday before their reinstatement.

A 52-year-old production worker Jeong Gi-hyeon who joined the corporation in 1985 is one of 92 workers getting his job back.

“I knew that the corporation and the labor union have agreed on our reinstatement, but I was anxious about the corporation going back on their word,” Jeong told the JoongAng Ilbo. “I’m very glad that I’m back at the workplace where I spent most of my career.”

The conflict between the Hanjin Corporation and the labor union occurred when the corporation notified a plan of laying off 400 production workers to its labor union on Dec. 15, 2010.

The corporation said it has failed to attract new contracts since March 2008, thus the layoff is necessary.

The labor union argued that the corporation displaced the work done by the Yeongdo shipyard by establishing a new shipyard in Subic Bay, Philippines, in 2007.

In February of 2008, 306 workers of the 400 voluntarily left their workplace under an agreement with the corporation, and the remaining 94 workers began a long-time rally in Busan.

The conflict grew when a leftist activist Kim Jin-sook from the Korean Confederation of Trade Unions started her sit-in protest atop a crane in the shipyard on Jan. 6.

The protest continued for most of the year. In June, the protest reached its peak level as many violent protests broke out among aggressive union members and civic groups.

Protesters staged rallies at the so-called “Bus for Hope,” which was organized to advocate for the reinstatement of the laid-off workers and violently clashed with police in Busan and Seoul five times.

“My family, including my wife and myself, actually gave up on the reinstatement,” said Kim Gyeong-chun, 52, who joined the corporation in 1985. It is his second time being reinstated.

When the laid-off breadwinners weren’t able to make money, their wives had to go to work. They took part-time jobs cooking at construction sites and local restaurants, and many children gave up on going to university. Many workers who only had shipbuilding skills had to work on construction sites that only paid 1 million ($920) to 1.5 million won a month. They previously earned 40 million to 60 million won annually in Hanjin.

“I shed tears many times because there was no future for me and my family,” said Cheon Byeong-ho, 51, who joined the corporation in 1980.

On Nov. 9 last year, the corporation and the labor union reached an agreement to end their 325-day labor dispute by rehiring all 94 laid-off workers, paying each 20 million won in compensation. One of the workers decided not to return to the shipyard, and another worker retired due to age.

“While the long-term protest was going on, I realize that it is such a blessing that I have a place to go to work every morning,” a worker who requested anonymity told the JoongAng Ilbo. “I also realize that the corporation is not an enemy that we should fight, but a partner that we should cooperate with.”

The idea spread to other workers. According to the corporation, 561 of the 705 workers who were members of the aggressive union joined a new labor union that emphasizes friendly cooperation with the corporation in January.

But they still have a long way to go to normalize the company. All the 93 reinstated workers will take a paid vacation as they don’t have work to do. The corporation has only obtained three orders since 2008.