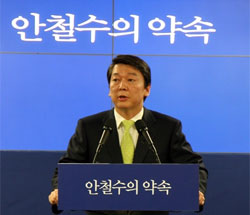 Emphasizing his commitment to a new type of politics, independent presidential candidate Ahn Cheol-soo said yesterday he will spend only half the election campaign expenses authorized by law - and challenged his two rivals to do the same.

“When I officially announced I’d run for the presidency, I remember saying that a new kind of politics should start from the campaign process,” Ahn said yesterday in a news conference describing his platform at his campaign office in Gongpyeong-dong, Jongno District, central Seoul.

“The first step toward a new campaign would be to save taxpayers’ money by using less campaign funds,” Ahn said. “I would like to promise the people that I will conduct an election using half of the 56 billion won ($52 million) entitled by law to a candidate.”

Ahn added, “I urge presidential candidates Moon Jae-in [of the opposition Democratic United Party] and Park Geun-hye [of the ruling Saenuri Party] to also promise the people to use only half the campaign funds. It’s a plan that can be realized immediately if the two are willing.”

According to the National Election Commission, each of the 11 declared candidates is allowed to spend 56 billion won on their campaigns for the Dec. 19 presidential election, which is reimbursed by the state. The money is spent mainly on campaign literature and advertisements on television, radio and in newspapers.

The DUP said it will consider Ahn’s plan. “We believe the purpose and meaning [of the plan] are in the right direction,” said Jin Sung-joon, spokesman for Moon’s campaign. “We hope [the plan] is realized after holding active discussions.”

The ruling Saenuri Party, on the other hand, took the opportunity to make a dig at Ahn.

“It’s a good proposal to save election campaign funds,” said Ahn Hyung-hwan, spokesman for the Saenuri Party candidate Park’s campaign. “But Ahn is unqualified to propose such an idea because there’s a 50 percent possibility that he will not become a presidential candidate.”

Liberal candidates Moon and Ahn started negotiations last week to consolidate their candidacies to compete against Park. One of the men is expected to stand down in favor of the other. Yesterday, the two candidates agreed in a phone conservation to create a joint working-level team to continue those negotiations.