Old downtowns in Korea’s cities are hollowing out

Old downtowns in Korea’s cities are hollowing out 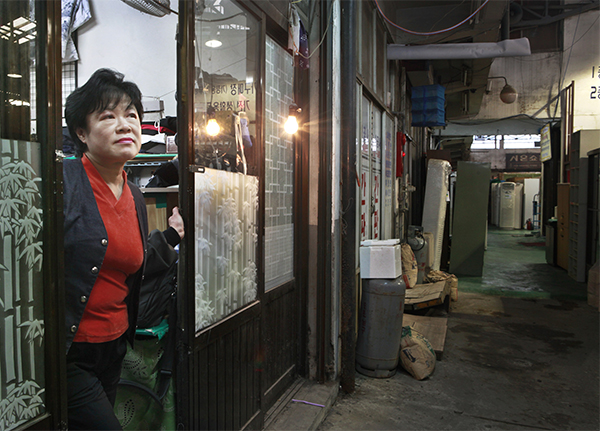 Choi In-ja, who has worked for 27 years as a seamstress at the Juan Market in Nam District, Incheon, says the market has shrunk to two tailor shops and one bistro and only gets a few visitors a day. By Park Sang-moon


The Juan Market in Incheon’s Nam District has seen better days. When textile and electrical appliance factories were buzzing at the nearby Juan Industrial Complex in the 1970s, ’80s and ’90s, the market was where people went before or after work or at lunchtime.

“During the Chuseok holiday and Lunar New Year, workers from the complex all flocked here to buy gifts for their families and alter their clothes before heading home,” says Choi In-ja, a tailor who has run a shop in the market for 27 years. “The central area was where food stalls were located. Now that space is filled with used furniture for sale.”

The covered urban avenue, formerly home to more than 50 flourishing businesses, now has only Choi’s shop, another tailor shop and a bistro. The other shops are empty and dust covers most surfaces. Only a handful of people come and go every day.

During Korea’s industrialization from the 1970s onward, Korea’s cities were honeycombed with markets and unofficial industrial zones like Incheon’s Juan Market. They provided parts to the larger factories and industrial parks on the cities’ peripheries and services to their workers. They had their grim side, as seen in the recent Korean drama “Pieta,” set in a dog-eats-dog industrial neighborhood of Seoul that is now being redeveloped around the once-covered Cheonggye Stream.

But they were integral parts of the “Miracle on the Han River,” even when far away from the Han in Daegu or Busan.

But as Korea’s industries evolved, a lot of transplantation has taken place. Some industries are sourcing jobs to other countries. Others are moving their factories to suburban or rural areas to take advantage of cheap land or other benefits.

That has led to a rapid hollowing out of the industrial neighborhoods in cities, precipitated by the Asian financial crisis of 1997, which ushered in so many changes to the Korean economy.

“Following the financial crisis in 1997, the number of factory workers who frequented the market substantially dropped,” says Yu, owner of a dress shop near the Juan Market. “I used to run my store inside the market and attracted over 50 customers a day.” She moved the shop a short distance away in the hope of getting more customers. “But I get just five customers when I am lucky.”

The Juan Industrial Complex specialized in labor-intensive businesses like textiles, appliances and assembling metal products. Its location near Incheon Harbor gave it an edge over other industrial parks.

But with a shift to technology-driven sectors such as automobiles and microchips, an exodus of companies started in the mid-1990s. Incheon’s Nam District is now one of 44 regions in the country undergoing a hollowing-out process, according to the Korea Research Institute for Human Settlements. The district’s population hit 420,000 this year, down from 561,000 in 1993.

The Seobu Market in Seo District, Daegu, one of the three main commercial markets in the city in the 1980s, has followed a similar, cracked path. Along one alley in the market, only 100 out 504 shops were open for business late last month. Many buildings display wide cracks.

“The market these days looks like a refugee camp with a total absence of vibrance,” says Choi Jang-seong, president of the Seobu Market Merchant Union.

The redevelopment of the Cheonggye Stream area of Seoul is a completely unique case, analysts say. For most of these former industrial zones in Korean cities, nothing is being done to combat the hollowing out or to fill the vacant spaces with some source of commerce and life.

What cities like Busan, Daegu, Incheon and Changwon in South Gyeongsang most fear is coming true: the hollowed out areas are becoming slums.

“The fact that many regional governments are concentrating on finding new places for urbanization projects is not helping to ease deteriorating conditions in these hollowing-out areas,” says Jang Su-chan, professor of public administration at Mokwon University in Daejeon.

According to a study by the Korea Research Institute for Human Settlements of a total of 144 industrialized areas in Korea, 23 show early signs of urban decay while 44 are already hollowed out. The institute evaluates districts by seeing if their populations are dropping and by counting the percentage of buildings over 20 years old.

Five districts in Seoul are included in the 67 being hollowed out.

“Those 67 districts are in dire need of central government assistance in reviving themselves,” Yu Jae-yoon, chief researcher at the institute, told the JoongAng Ilbo.

Some policy makers see urban redevelopment as the key to at least slowing the hollowing-out. But urban redevelopment projects usually focus on generating profits, and the moribund real estate market is keeping a lot of investors from coming in because they don’t expect property prices to rise in the near future.

Redevelopment of areas is also a tricky balancing act. Tearing down neighborhoods inevitably drives residents away, and it’s hard to get them to return if new investments are not coming in on property.

“We need a shift of paradigms for long-term urban development,” said Kim Sung-whan, director of the city development planning division of the Korea Land and Housing Corporation. “What is required is a comprehensive urban maintenance system that systematically includes all government divisions in charge of long-term urban planning and related programs.”