Prosecutors and police go to war over bribery case

Prosecutors and police go to war over bribery case 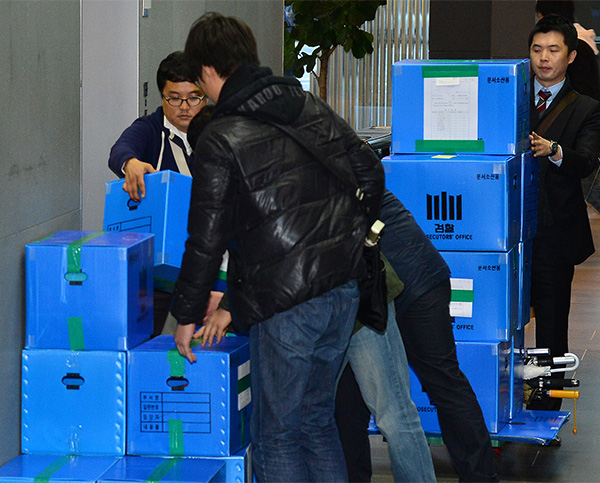 Investigators move boxes of documents from the Eugene Group office in Gongdeok-dong, Mapo District, western Seoul, which they raided and seized yesterday. [YONHAP]


Prosecutors yesterday raided the office of a senior prosecutor surnamed Kim who has been under investigation by the police for allegedly taking hundreds of millions of won from a notorious con artist and a mid-sized conglomerate.

Aside from the case itself, the events showed an escalation in the long-running tug of war between police and prosecutors over criminal investigations, with the police honing in on alleged corruption by prosecutors.

But in this case, the police have loudly declared they will independently continue their investigation and officially notified the accused prosecutor to appear at their office for questioning on Friday. The prosecution said its own special investigation team, composed with nine prosecutors and 15 investigators, simultaneously raided Kim’s house and office in Seocho District, southern Seoul, and the headquarters of Eugene Group in Mapo District, western Seoul, and other related offices. They seized documents, account books and computer hard drives as evidence.

Kim, a senior prosecutor at the Seoul High Prosecutors’ Office, is suspected by police of taking 240 million won ($221,000) from Cho Hee-pal, a notorious swindler, and also receiving 600 million won from Eugene Group, a construction company, through a borrowed bank account in 2008.

Cho allegedly ran a nationwide pyramid scheme between 2004 and 2008 that attracted about 3.5 trillion won from 30,000 investors. He fled to China with the money in 2008. There are unverified rumors that Cho died in China.

The police said Kim was at the Seoul Central Prosecutors’ Office in 2008 and his duty was investigating irregularities at corporations. They say when they investigated Cho’s hidden assets, they came across evidence that Kim had withdrawn money from one of his bank accounts. They allegedly verified the withdrawals with CCTV images showing Kim withdrawing money from ATM machines.

After the police’s investigation was reported by media last week, the prosecution appointed Kim Soo-chang, 50, from the Legal Research and Training Institute, to lead its own investigation into Kim on Friday. It is the third time the prosecution appointing a special prosecutor to investigate one of their own colleagues since the special prosecutor system was introduced in 2010 as a part of judicial reform.

“I think I was appointed as the special prosecutor because I never have met Kim,” Kim Soo-chang told reporters. Sources in the prosecution said that Kim investigated the Cho’s fraud case when he was the head of the Daegu Western District Prosecutors’ Office.

On the battle between the police and prosecutors, Kim told reporters: “There are reasons that the prosecution has rights to control the police’s investigation processes.

“It seems like putting a prosecutor in a jail is the police’s biggest wish,” he continued. “The police will continue its investigation independently because it has already been investigating the case,” Kim Ki-yong, commissioner of the National Police Agency, told the JoongAng Ilbo.

“The prosecution is infringing on the police’s rights by appointing a special prosecutor for a case that the police already has investigated. It could violate suspects’ human rights if two separate investigation agencies operate probes independently.” The police’s Intelligence Crime Team, which is investigating the case, is speeding up its work. It said it has obtained testimony from a man surnamed Choi, who lent his name for a borrowed bank account that Kim used. “The actual owner of the account is [Prosecutor] Kim,” Choi was quoted as saying.

The police also said there are three more prosecutors who are suspected of illegally purchasing Eugene Group’s stock after acquiring intelligence from officials of the corporation.