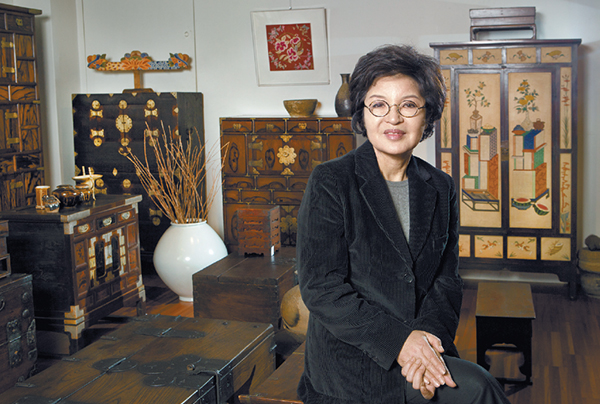 Yang Eui-sook’s Yenar Gallery in Sogyeok-dong, Jongno District, is full of antiques she picked herself. By Park Sang-moon


The saying “oldies but goodies” has special meaning for Yang Eui-sook.

The 66-year-old has been a passionate collector, broker and appraiser of antiques for 40 years, with her area of specialty being folk art.

For those not into antiques, she is better known as one of the regulars on a TV show where people get their antiques appraised. Yang has been on the weekly show for 17 years.

She started collecting antiques because she liked old stuff. It didn’t hurt that her husband is an architecture professor who studies folk houses across Korea, and she accompanied him around the country looking for antiques along the way.

It didn’t take long for her house to be crammed full of antiques, so she opened a gallery.

Her guiding principle of antiquing was: “Never buy to make profits.”

She bought only items she really loved. That way, when she was promoting them to buyers she meant every word of what she said. And when they were bought, she sent them away as if she were dispatching her own children. Sincerity and word of mouth went a long way, and she got one regular customer after another. Today, Yang is an appraiser recognized by art aficionados as well as the general public.

The Korea JoongAng Daily recently sat down with her at a cafe in the Samcheong-dong area, central Seoul, to discuss what makes Korean antiques special, the latest in the Korean antique market and advice for buyers.

In that sense, Yang strongly disagrees with the saying that Koreans traditionally were “white-clad folks,” referring to how they all wore white clothes. Instead, she says, Koreans were “color-clad folks,” as evidenced in the colorful goods made during the Silla and Goryeo dynasties (1 B.C. -1392). Although commoners in Korea generally wore white during the Joseon period (1392-1910) to save the cost of dying textiles, that wasn’t the case in earlier dynasties.

Today, Yang is focused on recreating antique wood furniture so students of ancient arts can get their hands on antiques more easily.

“How many people can afford antique furniture that costs tens of millions of won?” Yang says.

At least five people are involved in the project, each arguably among the best in their area of expertise: Woodworking, painting, decorating, carving and glazing.

Although she’s been working on this for the past five years or so, she doesn’t have a factory because she uses only highly skilled artisans.

With her handmade authentic reproductions, Yang’s goal is to participate in international furniture fairs and possibly make a place for Korean antiques in the modern world. 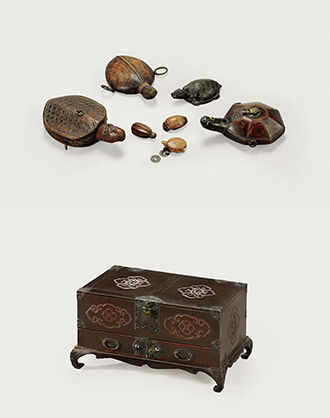 Fortune-telling boxes (top) and ham, or a traditional Korean storage box (above), are some of Yang’s favorite pieces. Provided by Yang Eui-sook

Q. You majored in home economics in college and craft in graduate school. How did you get into studying antiques?

A.In graduate school, I wrote about decorations on bandaji [a traditional Korean chest with half of one side hinged] for my dissertation. For that, I visited 500 households with different bandaji and made a detailed report on each of them.

My professor looked at my dissertation and asked me if I had really inspected all of bandaji myself. I answered yes, and he suggested that we hold an exhibition at Shinsegae Art Museum [which opened in Shinsegae Department Store in the late 1960s]. The museum was Korea’s best in those years.

Back then, I was so young - in my early 20s. And I refused, thinking that it would be too much for me. But now that I am old and experienced enough, I look back and understand why my professor made such a suggestion. It would have been a breakthrough in the field of bandaji and provided some very useful data.

After getting married, I tagged along with my husband as his assistant whenever he inspected folk houses. And in our trips I collected one antique after another. After doing that for years, our home was full of ancient art and furniture, and people visiting us said our house looked like a folk village.

Your specialty is folk art. What’s special about it?

Also, folk goods are a representation of how common people lived, not certain privileged people, but common people like you and me. They also reflect their environment and sentiments, emotions and thoughts.

Among folk goods, there is paemul, or women’s jewelry often received from in-laws upon marriage. And when I study them, I also understand what they meant for Korean women in ancient times.

There is a saying that even during the Asian financial crisis in late 1990s, people sold everything, but not paemul.

It is because they occupied a special place in women’s hearts. It was their very own asset at a time when women didn’t earn money, and it was something they would give to their daughters-in-law. So it was more than just jewelry for them.

You’ve been appraising antiques for at least 17 years. What is the most important part of the job?

Since I’ve been in the antique market for a long time - 40 years - if I see something I have never seen before, I’m immediately suspicious. Chances are high that they are not authentic.

But since my specialty is folk goods, now and then I still come across things I’ve never seen. Because with folk art, there are no set rules. People just made things they liked.

In terms of paintings, we appraisers say that if our first response is ‘Hmm .?.?. something is off,’ then chances are they are not real antiques. And we try to stick to our first impression and gut feeling because the more we stare at the pieces and study them, the more clouded and difficult our judgment gets.

But I do want to specify what I mean by “fake.” It’s considered fake if it’s touted as an antique when it’s not. They are distinctly different from recreated goods.

Also, when we say antiques, we usually refer to goods made before 1910, because that year Japanese colonization began and then the Korean War occurred, which brought many changes to Korea and its traditions. However, people nowadays have broadened the term antiques to refer to goods more than 30 years old.

What’s unique about Korean antiques, and what’s your advice for first-time buyers?

Ancient Koreans put much importance in yin and yang, the balance between the two. How antiques were designed and created attests to that.

Also, the concept of jeokjae jeokso, or having a proper piece in a proper place, seemed to be quite crucial for Koreans.

There also are the concepts of “less is better” and “in harmony with nature” in Korean antiques. They didn’t try to go against or clash with nature. Using bamboo nails is one indication of such a belief.

And it’s quite astonishing how Korean artisans put so much effort into finding the best ways to express beauty. They used different types of wood for different patterns. They used various materials such as mother-of-pearl and bamboo for decoration. They even used cow’s horn, although only for palace goods and only temporarily.

One piece of advice I’d like to give to those purchasing ancient art and furniture is to see with your mind, not necessarily with your eyes. Things that are visually pleasant only in an instance, you will likely get tired of them at the next instance. So try to see them with your mind.