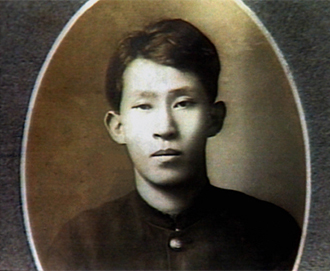 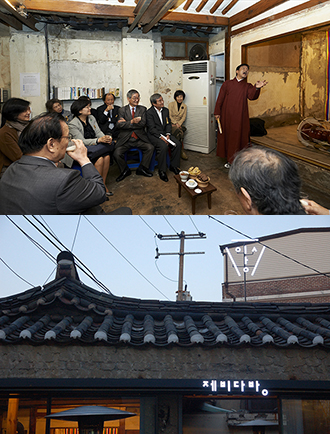 The opening of the Jebi Dabang on Oct. 26 (top). The teahouse where the Korean literati once gathered has been reconstructed in a modest-looking hanok, or traditional Korean building, in central Seoul, where poet Yi Sang used to live (below). Provided by the Arumjigi Culture Keepers Foundation

Shakespeare and Company, Sylvia Beach’s independent bookstore in the heart of Paris, was a gathering place for writers and philosophers in the 1920s. Ezra Pound, Ernest Hemingway, James Joyce and Ford Madox Ford were just some of the frequenting figures of the Lost Generation.

Life was much harder for the Korean literati in the early 20th century, one of the darkest periods in Korean history, as officials of the Japanese occupation sought to suppress writers on the peninsula.

But one safe haven, the Jebi Dabang (Swallow Teahouse) set up by the famous and rather mysterious poet Yi Sang (1910-37), did emerge in Seoul.

It may have lacked the Parisian glamour, but the Jebi Debang was where Yi, whose real name is Kim Hae-gyeong, sipped tea and discussed current affairs with his contemporaries, including Western-style painter Koo Bon-woong (1906-53).

Yi had to close the teahouse, which is thought to have been in the Jongno 1-ga in Jongno District, central Seoul, due to financial difficulties. But soon after, aware of the importance of teahouses for the intelligentsia, he opened a cafe in Insa-dong and another teahouse in Jongno 1-ga.

Seventy-five years after Yi’s death from tuberculosis, the Jebi Dabang is back. The teahouse reopened in late October in Tongin-dong, central Seoul, within the old house of Yi, a modest-looking hanok, or traditional Korean home, west of Gyeongbok Palace.

“We wanted to commemorate the spirit of Yi Sang,” said Shin Ji-hye of the Arumjigi Culture Keepers Foundation. “Yi spent time with people he loved at Jebi Dabang. So we created a space where people can come and have a drink and good time, all free of charge.”

The Arumjigi Culture Keepers Foundation is a nonprofit organization devoted to protecting and preserving Korea’s traditional culture. The foundation and National Trust for Cultural Heritage have been preserving and managing the hanok.

The foundation also took care of a home owned by Yi’s uncle, but that site was demolished after his uncle’s death and was replaced by another refurbished hanok. Yi lived in his uncle’s house between the ages of 3 and 23.

It’s true that of all the teahouses in Seoul, he was particularly attached to Jebi Dabang and its concept.

“Spring may never come, but swallows will always have the feel of spring. I think the name ‘swallow’ [jebi] best represents this country’s mood, and that is why out of all the teahouses, I am the most attracted to Jebi Dabang,” Yi wrote in the Samcheonni Magazine in 1934.

The Arumjigi says the hanok will be used as the teahouse until April 17, hosting various cultural events like booking readings and conversations with prominent figures in the cultural scene.

Kwon Yeong-min, a Korean literature professor at Seoul National University, will be holding a lecture on Yi Sang on Saturday, and Son Suk, a famous theatrical actor, will hold a lecture later this month. Officials say they will finalize times for the events on their Web site as they are planned.

“Besides the teahouse and cultural events, we have prepared two maps of the area that visitors can use to tour and follow the footsteps of Yi Sang and Korean literati of that time to see and experience things through their eyes,” Shin added.