To compete in industry, agency steps outside the cube

To compete in industry, agency steps outside the cube 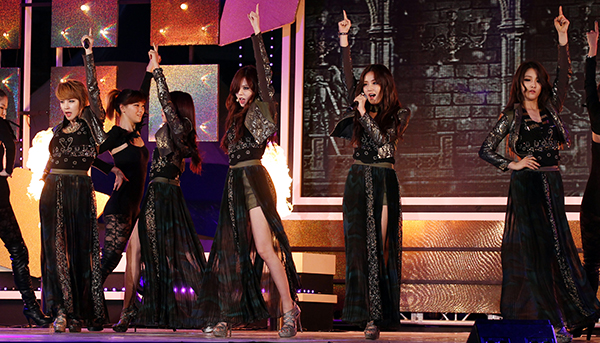 
In the fast-paced industry that is K-pop, churning out one idol group after another does not guarantee success, especially in the long run.

That is why Cube Entertainment CEO Hong Seung-seong stepped outside of the proverbial box and created an innovative and experimental culture within the company.

“We are all about trying new things,” says An Hyo-jin, public relations manager at the entertainment agency.

While other agencies focus on recruitment and seem to promote new groups every year, Cube Entertainment prides itself on fostering its own talent and promoting existing artists through new marketing techniques such as inter-group duos and concerts abroad.

Founded just four years ago, Cube Entertainment, headed by the former CEO of JYP Entertainment, has contracts with G.Na, 4Minute, Beast and Roh Ji-hoon, the “Great Rebirth” contestant who recently made his debut.

With its stars secured, the agency is now ready to compete with YG Entertainment and other K-pop giants. 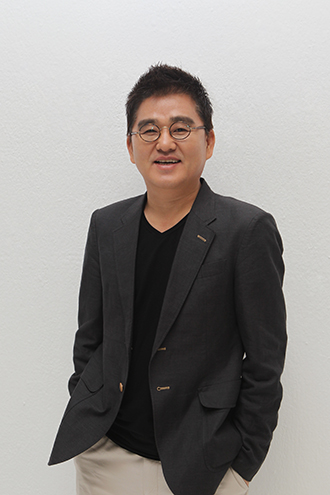 With its diverse and eclectic lineup of artists all under 25 years of age, the company has truly embraced its mission, creating a fresh image and redefining the boundaries of Korean music.

Last year, Hong came up with the idea to form a duo with its existing popular artists, which became known as Trouble Maker. Hyun-a from 4Minute and Hyunseung from Beast came together temporarily for an industry-first co-ed subunit duo.

Trouble Maker’s hit song was the talk of the town with its video’s choreography full of sexual innuendos, making it one of the most talked about - and complained about - tracks last year.

There have been subunit groups before, like Orange Caramel, a subset trio of After School and Super Junior members in various formations, but never before has there been a mixed-sex group formed by an agency.

It was a risky move. How would the over-zealous fans take the sexual chemistry between the members? Alterations were made in the end to accommodate heartbroken fans of Hyunseung, but its collaborative debut EP was destined to be an unprecedented hit from the beginning.

“Although they were a subunit group, the image of Hyun-a and Hyunseung as a duo really stuck,” says An, who affirms that to call the collaboration a success would be underselling it.

It wasn’t just the hit music video that made 2011 a huge year for the budding agency. It was a year of many firsts, including the maiden United Cube Concert overseas. With the performance, Cube Entertainment became the first K-pop agency to hold a concert in South America and England.

After kicking off the tour in Seoul in August of last year, 4Minute, G.Na and Beast made their way to Japan and then London and Sao Paulo in the winter.

“It took some 30 hours to get to London and Sao Paulo,” An says. “Although the groups aren’t exactly mainstream, local media took an interest in the concert because of the fervor of the fans.”

From left : Hyun-a and Beast

K-pop is often regarded as a subculture with an obsessed fan base in the West. And one only needs to look at Psy and his “Gangnam Style” video that went viral to understand that all you need to make it big as a K-pop artist is to earn the public’s approval.

Ahead of the Brazilian concert on Dec. 13, more than 300 South American fans flocked to the Sao Paulo Airport, all chanting the names of their favorite stars.

As 4Minute’s Jung Ji-yoon recalled, “There were fans who were crying and some holding welcome banners for us. I made eye contact with one fan, and it was such a surreal moment for me.”

And it wasn’t just the artists who were shocked by the unexpected turnout.

“I got goosebumps in Brazil,” says An, who said she thought she had seen it all after years working as a media staff for the entertainment agency.

“Foreign fans are different from fans in Korea. They have a whole new level of love, respect and awe that I’ve never witnessed before. They organized flash mobs, staged events and really campaigned to promote the acts.”

Due to the fans’ enthusiasm, United Cube Concert artists made their debut on Brazilian TV on Dec. 18. United Cube acts the subjects of television channel Rede Globo’s primetime show “Fantastico.”

A representative from the program said at the time, “We were blown away by the public’s interest in K-pop.”

The network added that after the airing, it was flooded with inquiries about Beast, 4Minute and G.NA from those who wanted to know more about them.

As the communications officer for the agency, An says that one image that she’ll remember forever was seeing Sao Paulo fans sob as the concert drew to an end. “They knew that they wouldn’t be able to see the singers for a long time and were just that moved.” 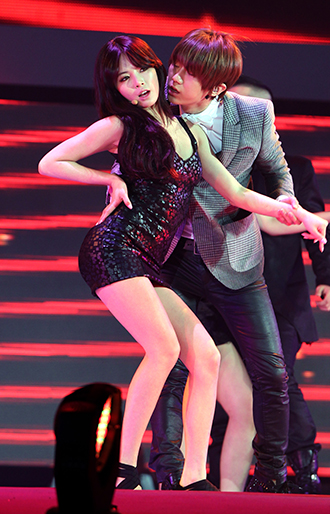 Hyun-a from 4Minute and Hyunseung from Beast perform their hit song as the duo Trouble Maker at last year’s Golden Disk Awards in Osaka, Japan.[Ilgan Sports]

As bizarre as the crazed fandom can seem, it is what keeps the industry moving. And apart from having the support of loyal fans, there is also an element of luck that comes into play for the success of a K-pop artist.

After all, if it weren’t for Hyun-a’s crucial cameo in Psy’s hit video that amassed more than 708 million views to date, it’s difficult to say whether she would be receiving the international attention she’s been getting of late.

Her latest release “Ice Cream” was viewed more than 20 million times in 10 days, a feat that even Psy couldn’t pull off.

“We can’t deny that ‘Gangnam Style’ played a part in Hyun-a’s popularity soaring abroad,” An says. “But ever since her first solo album ‘Bubble Pop,’ there’s been steady propositions from foreign media organizations and agencies.”

Since Billboard took note of Hyun-a and ranked her 17th on the “21 Under 21” last year, her entry into the U.S. market seems to be imminent.

While An doesn’t deny this, she says Cube is happy focusing on the 4Minute member’s solo album at home for now, which was launched two months ago.

This may seem like an odd thing in an industry where quick cash and milking talent for all they are worth is the norm. In many ways, this would be the perfect time for the “girl of the moment” to promote herself in the United States.

“Because she’s so young [20 years old] we are not in a hurry and when we do get there, we just want to do it right.”

It’s hard to imagine the other major entertainment agencies in Korea taking a similar approach.

Even on the inside, Cube is unusual with its strong commitment to offering artists ongoing emotional support.

“They all call him ‘father,’?” says An, talking about how Hong is referred to by the artists at the agency.

The organizational hierarchy that is often the subject of scrutiny, with the head honchos described as an intimidating, removed figures who pressure artists, is a far cry from the scene at Cube.

“He’s been in the industry for 20 years and he’s very involved. Even with Trouble Maker, the dance, stage directions as well as the production were all his idea,” An says.

“At the same time, he’s always asking the kids how they like his ideas and constantly prompting them for feedback.

“One of his biggest concerns is the psychological welfare of the talents. He’s well aware that so many of them start at a young age and that child entertainers are often very vulnerable. So everything from sex education to manners and one-on-one counseling are there for the kids.”

The character development program begins when aspiring singers enter the agency as trainees. It’s an ongoing support system that carries on even after they’ve made it big.

“Even after the debut, our entertainers make time for volunteer projects as well. If need be, we modify their schedules to allow time for all of this.”

An thinks that the close-knit relationship that Hong has with the agency’s artists is the reason behind Cube’s rapid success.

“Take Trouble Maker - it was the result of great synergy between the artists and producer, and even we were surprised at how well it did.”

With a groundbreaking overseas agency tour complete, the success of creating a subunit with idol groups and Hyun-a on the brink of global stardom, the agency seems to be on the verge of exploding.

“For a company that’s only been around for four years, we have a strong presence in Asia,” says An.

“We want a bigger piece of the pie,” An says, adding that slowly and steadily it wants each of its acts to dominate the various segments of the K-pop industry.