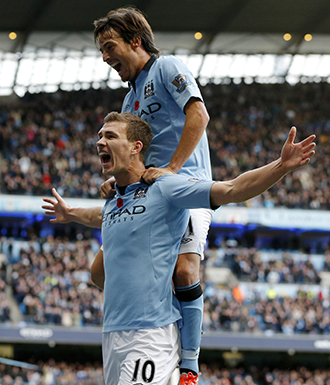 LONDON - Manchester City beat Tottenham Hotspur 2-1 to stay two points behind leaders Manchester United in the Premier League but Chelsea lost ground in the title race when they could only draw 1-1 at home to Liverpool on Sunday.

Champions City came from behind to beat Spurs at Etihad Stadium with substitute Edin Dzeko lashing home their 88th-minute winner after Sergio Aguero had cancelled out Steven Caulker’s first-half header for the visitors.

Chelsea dropped points at Stamford Bridge where captain John Terry headed them in front after 20 minutes of his return from a four-match domestic suspension before being carried off with a knee injury after an accidental collision with Luis Suarez 19 minutes later.

Suarez, who has been outstanding for Liverpool this season, then headed in an equalizer 17 minutes from time for his eighth league goal of the season, scoring for the fourth successive match he has played.

United, who came from 2-0 down to beat Aston Villa 3-2 on Saturday, tops the table with 27 points from 11 matches, followed by City on 25, Chelsea on 24, and Everton and West Bromwich Albion on 20.

In Sunday’s other match, Sam Allardyce, who was sacked by Newcastle United after 24 games in charge in 2008, enjoyed a winning return to St James’ Park as his West Ham United side won 1-0 to move up to sixth.

Former Newcastle captain Kevin Nolan scored in the first half when he turned home a shot, which was going wide, into the net from six yards.

Spurs, who had won their previous three away league matches, went ahead at City when Caulker headed home a Tom Huddlestone free kick after 21 minutes to threaten the home team’s unbeaten start to the league season.

The champions, though, took control after halftime with Aguero scoring a deserved equalizer in the 65th minute when he planted the ball wide of the diving Brad Friedel.

Dzeko, who replaced Carlos Tevez with 17 minutes to play, then struck in the 88th when he eluded the Spurs defense, watched a chipped pass from David Silva fall into his path, turned and lashed the ball past Friedel.

Last season, he scored four of City’s goals in their 5-1 win at White Hart Lane and has now netted seven times this season, six of them after coming on as a substitute.

“Yes, its not the first time its happened, but I think we were the better team after 90 minutes, it shows our character and that we are strong,” Dzeko told Sky Sports.

Asked if he had a message for his manager Roberto Mancini, the Bosnian international replied: “The goals are my message.”

Mancini, looking happier than he had in midweek when conceding City were all but eliminated from the Champions League after a 2-2 draw with Ajax Amsterdam, said he made Dzeko no guarantees he would start in future.

“[I know] he is not happy. A player who is happy on the bench does not exist,” Mancini said.

In Madrid, Barcelona extended its near-perfect start thanks to another Lionel Messi double but again suffered the defensive lapses that have plagued them this season in a nervy 4-2 La Liga win at Real Mallorca on Sunday.

Atletico de Madrid kept pace with the leaders three points back in second with a 2-0 success at home to Getafe, while third-placed Real Madrid was indebted to goals from a wounded Cristiano Ronaldo and substitute Alvaro Morata in a 2-1 win in almost unplayable conditions at waterlogged Levante.

Deployed at center forward in the absence of injured strikers Karim Benzema and Gonzalo Higuain, Ronaldo sustained a nasty cut above his left eye when he was caught by David Navarro’s elbow in the opening minutes of the match in Valencia.