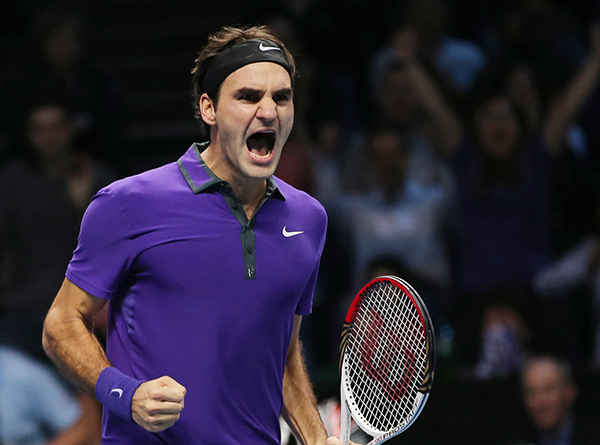 Roger Federer of Switzerland celebrates victory after the men’s singles semifinal match against Andy Murray of Great Britain on day seven of the ATP World Tour Finals in London, Britain, Sunday. Federer won 2-0 to set up a showdown with Novak Djokovic. [XINHUA/YONHAP]


LONDON - Roger Federer provided an emphatic reminder that he will be chasing more major titles next year with a vintage display to outclass Britain’s Andy Murray on Sunday and set up a season-ending blockbuster with Novak Djokovic.

The Swiss 17-time Grand Slam champion, who will turn 32 next year, continued his dominance of the ATP World Tour Finals with a 7-6, 6-2 victory over the man who deprived him of Olympic singles gold at Wimbledon.

In his eighth final in 11 years at the ATP’s blue riband tournament, Federer will face world number one Djokovic after the Serb’s granite-like defenses helped repel the brute force of Argentina’s Juan Martin del Potro for a 4-6, 6-3, 6-2 victory.

Neither semifinal lived up to their prematch billing although Federer’s majestic form after a slow start against Murray had a sell-out crowd at the O2 Arena in raptures even if he was playing a home favorite.

Murray, who bounced back to win Olympic gold and then the U.S. Open after the heartache of losing to Federer in this year’s Wimbledon final, made a lightning start, breaking in the opening game, but ultimately played second fiddle to the master.

Federer edged an hour-long first set after an exemplary tiebreak and then turned on the style in the second to move one victory away from winning a hat-trick of titles at the Thames-side arena that has been hosting the championships since 2009.

“I think for both of us, it’s pretty straightforward. I think we’ve got to press out the last juice that’s left in our body and make it a successful year end.”

Like Federer, Djokovic also found himself initially overpowered by the wrist-bending forehand of the towering Del Potro but came through what he described as a “crisis” to ultimately romp to victory and stay on course for the $1.76 million jackpot for an undefeated champion.

The 25-year-old, the only player in the eight-man event to win all three round-robin matches, was a set and break down but once again showed the warrior-like qualities that have enabled him to end a second consecutive year as world No. 1.

Djokovic broke a faltering Del Potro’s serve twice in the second and third sets and surged to victory after winning 11 of the last 14 games.

“I believed that I could come back,” a good-humored Djokovic told reporters, before softening up the assembled media by offering up boxes of chocolates.

“I had a little, let’s say, crisis in today’s match from 4-4 in the first set to 2-2 in the second where I didn’t feel so good on the court, struggling to find my momentum and my rhythm.”