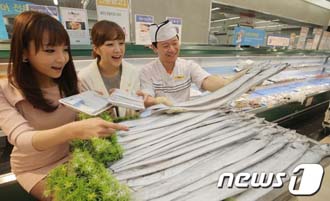 The price of largehead hairtail, or galchi in Korean, has continued to skyrocket for the third straight year and it is now selling for a record price as fishing supplies off the southern coast dwindle.

The slender silvery fish, also known as beltfish, formerly ranked as the bestselling fish at large discount chain stores nationwide but has been usurped this year. It is often seen as a side dish at local restaurants.

It is now more expensive than hanwoo, or Korean beef, and an extended series of price hikes have started to put consumers off.

As of yesterday, beltfish was selling for 9,800 won ($9) per 300 grams (10.5 ounces) at E-Mart, the nation’s largest discount chain store, up 26 percent from three years ago. On a 100-gram basis, this makes it 70 won more expensive than hanwoo bulgogi, or grilled marinated beef. The latter has fallen in price by 13 percent over the same period.

The price of beltfish at Lotte Mart has jumped 80 percent since 2009, with 240 grams now selling for 4,500 won. However, according to Seoul Agricultural and Marine Products its wholesale price has only climbed 50 percent over the same period to 125,959 won per 5 kilograms.

Only half as much has been fished this year as last due to an early cold spell and lower sea temperatures around Jeju. Even frozen hairtail, which is distributed at this time of year, is maintaining its high price.

Based on the price at auction at Jeju-based Seogwipo Fisheries Cooperative Association, 10 kilograms of frozen beltfish is now going for 145,000 won, 5,000 won more than in 2011.

However, the retail industry forecasts that retail prices will keep moving up.

“The price is expected to increase further as the water temperatures this winter are likely to drop,” said Cho Jung-hwa, a spokesperson for E-Mart.