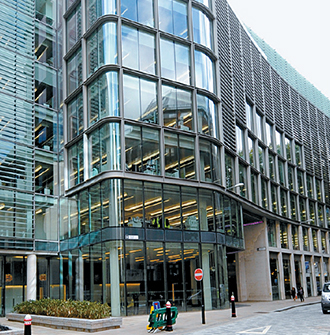 As future rate cuts by the Bank of Korea cause interest margins to fall and limit growth in the financial sector, insurers and asset management firms are zeroing in on real estate both inside and outside Korea to prop up their portfolios.

Hanwha Life Insurance, formerly known as Korea Life Insurance, is a case in point. The firm said it invested 250 billion won ($229.6 million) in an equity fund that controls the eight-story headquarters of international law firm Eversheds in a financial district in London in August.

The company will receive some of the property’s rental and parking fees as returns, Hanwha said.

“As the return rates on asset management projects have been dwindling due to the slowing domestic economy, we have switched our attention to property investments in developed economies to diversify our asset management channels and secure stable earnings,” said an executive at Hanwha Life Insurance.

“This building is ideal for investing in because its occupancy rate is near 100 percent and it is located [on Wood Street] in the heart of London, where many law firms, banks, telecommunications and consumer goods companies are situated.”

The insurer expects to reap annual returns of around 6 percent, he added.

Industry observers said more financial institutions are turning to real estate investments as they need to secure fresh revenue sources to cope with the widening gap between their promised returns to customers and the actual sums they received on their investments as interest rates hover at historic lows.

Previously, insurers preferred to put their money in long-term Treasuries as they need to manage insurance policies spanning 20 to 30 years. They preferred to avoid property investments as these are difficult to liquefy quickly and subject to a volatile market. 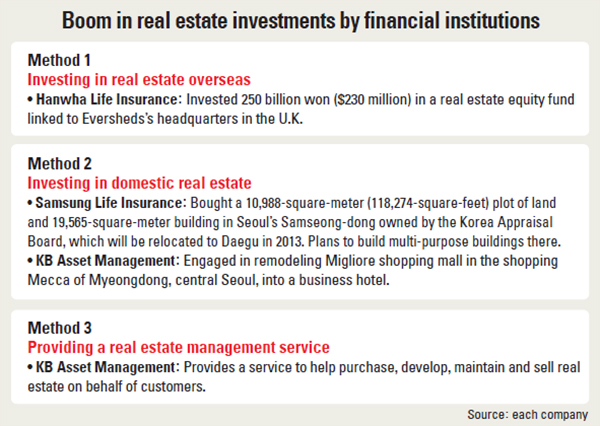 “Insurers have shifted their focus to real estate because their returns on Treasury bonds have slipped to the top of the 2 percent range in light of recent cuts by central banks,” said an analyst at a local brokerage. “Without a new source of revenue, they would never be able to pay the returns they promise on their insurance policies, which hover around the mid-4 percent range.”

Regarding media reports that Hanwha is considering investing in property in Sydney and Paris, a spokesman dismissed these as “groundless.”

Samsung last year won a bid to buy a 10,988-square-meter (118,274-square-foot) plot of land and 19,565-square-meter building for 230 billion won. The Korea Appraisal Board owned the building and land in Samseong-dong, southern Seoul, but it had to sell if off because it is scheduled to be relocated to Daegu in 2013 as part of the government’s administrative affairs relocation plan.

Situated in a prime spot adjacent to Teheran-ro, where many financial companies and venture enterprises are located, and Coex Mall, the area is regarded by realty investors as one of the few remaining jackpots in terms of large-scale development in Gangnam.

Samsung plans to build multipurpose buildings there as early as July, and expects to pocket annual returns of between 6 and 8 percent in rental fees.

“The return rate is likely to be more than double what we get from national bonds,” said an employee at Samsung. “In this low-interest-rate environment, most people would bet on real estate rather than Treasuries.”

KB Asset Management has engaged in remodeling Migliore shopping mall, which is located in the shopping Mecca of Myeong-dong, central Seoul, into a business hotel.

“There are few better locations than Migliore in Myeong-dong to start a hotel business in Seoul,” said an executive at KB Financial Group. “The area is already rich with Chinese and Japanese tourists who want to check out the latest Korean fashions, culture and eating trends.”