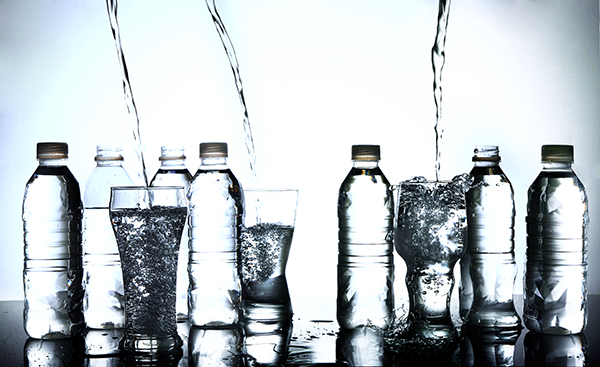 In the domestic bottled water market, water from Mount Baekdu and Mount Halla will directly confront each other soon.

Bottled water from the former will be distributed by Nongshim and Lotte Chilsung Beverage, while Mount Halla water will be supplied by the Jeju Province Development Corporation (JPDC) and Kwang Dong Pharmaceutical.

Thus far, the domestic bottled-water market has been dominated by Jeju Samdasoo, made using mineral water from Mount Halla in Jeju.

Nongshim has supplied Jeju Samdasoo nationwide, except for Jeju, since 1998, when it signed an exclusive contract with Jeju.

However, as suspicions grew about Nongshim profiteering from an exclusive sales agreement, JPDC fought a legal battle with the company. The Korean Commercial Arbitration Board ruled in favor of JPDC on Oct. 31, changing the whole map of the bottled-water market.

Nongshim, having lost its sales rights for Jeju Samdasoo, which it had retained for 15 years, immediately stepped forward to counterattack by siding with water from Mount Baekdu.

Accordingly, the top two companies in the domestic bottled-water market have announced they will fight for the top spot, as Lotte Chilsung Beverage said in March it would launch a new bottled-water brand importing mineral water from Mount Baekdu.

Nongshim established a bottled-water production plant in Jilin Province, China, in 2010, and has been selling the new product made of volcanic mineral water from Mount Baekdu on the border between North Korea and China under the brand name Baeksansoo.

It is planning to bring it into the domestic market as early as next month. 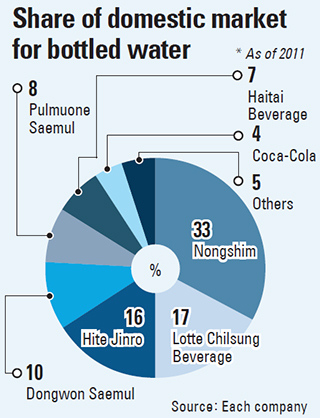 “If the top two companies in the bottled-water market release Mount Baekdu water at the same time, there will be a positive effect of being able to settle the new brands more quickly,” said an employee at Lotte Chilsung. “Through an aggressive marketing campaign that presents a clean image of Mount Baekdu, there will be a fierce confrontation between the water that comes from Baekdu and Halla.”

Especially for Lotte Chilsung Beverage, the change of best-selling bottled water Jeju Samdasoo going to another distributor is good news, since it expects that if it utilizes this change as an opportunity, it could emerge as the No.1 bottled-water seller.

Meanwhile, JPDC and Kwangdong Pharmaceutical have vowed to sustain the reputation of Jeju Samdasoo against new products.

From Dec. 15, JPDC and Kwangdong Pharmaceutical, which has been chosen as a preferred bidder by the JPDC, will jointly take care of distributing Jeju Samdasoo across the country.

The former will take responsibility for distributing it to large discount chain stores, super supermarkets (SSM) and convenience stores, which together account for half of Jeju Samdasoo sales, while Kwangdong Pharmaceutical will deal with other retailers.

JPDC is confident there will be no problem maintaining Jeju Samdasoo’s market share by having JPDC directly control distribution, as this would reduce the complex web of distribution, thus lowering the price to increase competitiveness.

It is also expected that if Kwangdong Pharmaceutical operates its existing distribution network, which has been selling Vita 500 and Corn Silk Tea, it will easily supply Jeju Samdasoo to the market.

“Consumers usually purchase products by their brand names, not by the companies that sell them. Jeju Samdasoo’s brand power is so strong that there won’t be a big change in the market share for the time being,” said an employee at Kwangdong Pharmaceutical.

Meanwhile, the domestic bottled-water market that was formed in 1995 was worth about 560 billion won as of last year, posting a 10 percent growth rate every year with 70 companies manufacturing and selling 100 bottled-water products.