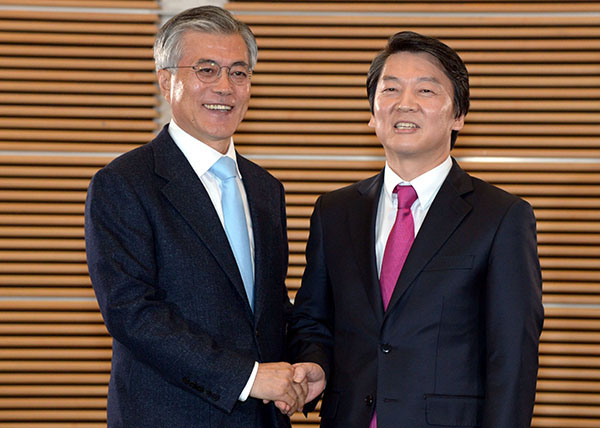 
The two liberal presidential candidates came closer to merging their candidacies yesterday by forming a special negotiation team composed of their closest aides to hash out the hard choices ahead.

Independent Ahn Cheol-soo and the Democratic United Party’s Moon Jae-in have agreed to consolidate their candidacies by Nov. 25-26, the candidate registration deadline, in order to unite votes from liberals and fight the ruling Saenuri candidate Park Geun-hye. The new team will decide how to decide which candidate will stand down.

Their team consists of three aides from each. Most participated in the negotiations before the Seoul mayoral by-election of October 2011, when a DUP lawmaker and an independent candidate decided to merge their campaigns against a ruling party rival.

Moon selected high-profile DUP lawmakers as his negotiators, including Park Young-sun, who surrendered her candidacy in the 2011 Seoul mayoral by-election to independent Park Won-soon after losing a primary.

The other two lawmakers, Yun Ho-jung and Kim Ki-sik, also have experience in campaign consolidations. Yun helped merge campaigns before the general election of June 2010. Kim was a negotiator for independent Park in last year’s Seoul mayoral by-election.

“We considered their experiences in some important candidacy negotiations and their good reputations as politicians,” Woo Sang-ho, an official from Moon’s camp, told reporters yesterday.

There are no lawmakers on Ahn’s team. All three of his negotiators are non-DUP people with experience in candidacy negotiations.

Cho Gwang-hui, an attorney known for his network among liberal politicians and civic activists, worked for Seoul Mayor Park’s campaign in 2011.

Keum Tae-sup, an attorney who claimed in September that Park Geun-hye’s campaign asked him to deliver a threat to Ahn, worked with Cho on that campaign.

Ahn also selected a former close aide to President Lee Myung-bak. Lee Tae-gyu, a former presidential secretary in the Lee administration, was a core member of Lee’s presidential campaign in 2007.

“For us, principle and direction is important,” Park Seon-suk, an official from Ahn’s camp, told reporters at a briefing yesterday. “We don’t know whether their experience [in negotiation] will be helpful or not.”

The negotiators are trying to bridge some wide gaps between the candidates.

The DUP’s Moon wants to choose the unified candidate through a televised debate and nationwide mobile voting on which of the men won. The country’s main opposition party has an advantage in being able to control its supporters.

Businessman-turned-professor Ahn, who became a political phenomenon through essays, lectures and appearances on television talk shows, wants the candidate to be chosen largely by a general opinion poll.

Moon is urging speed because a debate takes longer to prepare than a public opinion survey.