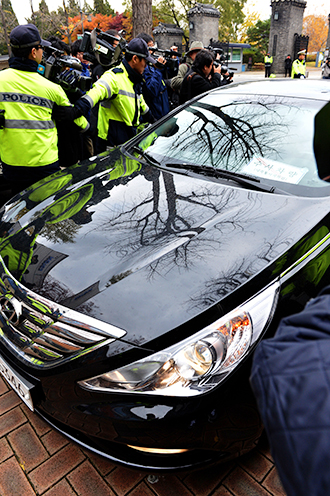 A car of the independent counsel approaches the training institute of the Financial Supervisory Service in Jongno District, central Seoul, yesterday to collect evidence from the Presidential Security Service. [NEWSIS]

The independent counsel investigating President Lee Myung-bak’s now-scrapped retirement home project tried raiding the Presidential Security Service for the first time in the country’s history but failed when the Blue House told it to go away.

At first, the team of the independent counsel headed by Lee Kwang-bum agreed to meet Blue House officials at the training institute of the Financial Supervisory Service in Jongno District, central Seoul, at 2 p.m. to receive documents and hard drives requested last week from the security service, which arranged the land purchase in Naegok-dong, southern Seoul, where the president’s retirement home was to be built.

“We discussed the time and method for the confiscation with the Blue House,” a spokesman of the team said.

But when the team checked the evidence, they discovered the Blue House had not really surrendered the materials they requested. 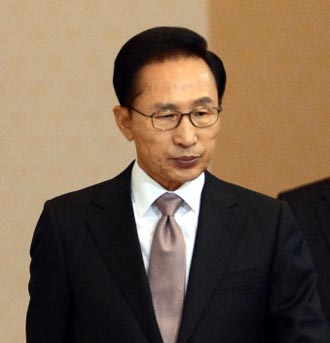 “We gave the Blue House a list of materials that must be handed over to us,” the spokesman said. “Then we notified them that we will forcibly execute the raid because necessary materials were missing.”

The Blue House rejected the raid. Under the law, legal enforcement agencies can’t raid the Blue House without its approval.

As to a plan to interrogate the first lady, Kim Yoon-ok, a counsel team official said they will question her in writing.

“We concluded we will send questions to Kim because we considered her position as the first lady,” a spokesman told reporters.

On Friday, the team requested an additional 15 days to complete its work, which has to be authorized by President Lee. Otherwise, the independent counsel’s 30-day probe will end tomorrow.

“They have done enough,” an official of the Blue House told reporters. “Most officials in the Blue House have strong negative sentiments about the extension.”

Sources in the Blue House said many officials view the counsel’s investigation as being very political.

The independent counsel has not obtained the original promissory note signed by the president’s 34-year-old son, Si-hyung, to borrow 600 million won ($550,000) from his uncle Sang-eun, who is chairman of DAS Corporation.